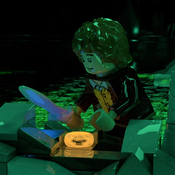 Explore the wondrous realms of the Cosmere, the massive interconnected universe for novels written by fantasy author Brandon Sanderson. Thousands of years ago, the mysterious Adonalsium was shattered into sixteen pieces. These Shards journeyed to new planets, where they established diverse and fantastical magic systems. The stories taking place on these planets can be found in The Stormlight Archive, Mistborn, Elantris, and other novels by Sanderson. I attempted to capture the interconnected nature of the Cosmere by creating dioramas and vignettes of specific moments from the individual books, or non-specific moments that would commonly occur on the planet in question.
Due to the current prevalence of Mistborn and The Stormlight Archive, I chose to devote the main display ring to dramatic moments from both series.
Travel to the planet Roshar (setting of The Stormlight Archive), where humans bond with spren to become Radiants and gain control over forces of nature. Join Kaladin and Shallan as they are confronted by a Chasmfiend, the apex predator of Roshar, deep within the chasms beneath the Shattered Plains. Kaladin is wielding Shallan’s spren Pattern as a blade, while Shallan uses her sketches and illusory abilities to distract the beast. Alternatively, have Adolin and Dalinar battle the enormous creature atop the plains. Fully encased in Shardplate and wielding their personal Shardblades, they face down the monstrous crustacean with honor and skill.
Mistborn takes place on Scadrial; a planet with radically different ecologies between two eras of note. During the days of the Final Empire, ash falls from the sky as Kelsier trains Vin to use her Mistborn abilities. Before long, the smiling thief finds himself in a fierce telekinetic pushing match with his protege; while the dark palace of Kredik Shaw looms over the city.
In a new Era of Scadrial, a team consisting of Wax, Wayne, Marasi, Steris, and MeLaan journey through the mountains to the mythical Temple of the Sovereign; where the fabled Bands of Mourning reside. Their goal is to protect the Bands and the incredible powers they grant from evil, but they’ll first need to keep Wayne from stealing the shiny spearhead at the door.
The lower ring features a series of twelve vignettes displaying other events from both Roshar and Scadrial, as well as the planets of Nalthis, Sel, Threnody, and others described in Brandon’s books. Worldhop like Hoid and see the sights the Cosmere has to offer.
Travel to Taldain, where the Sand Masters traverse the perpetually sunny Dayside and command thin ribbons of sand as extensions of their will!
Marvel at the colorful world of Nalthis, where Awakeners use Breath to animate items made of cloth, stone, and even metal!
Follow the rules on Threnody; for it does not do to enrage the Shades…
Tread carefully on the island of Patji, while the Aviar can help shield you from harm, the jungle still has dangers lurking at every turn!
Sel:
See the majestic city of Elantris, where Elantrians never age or sicken; and the most skilled can alter the world around them with a calculated swish of their fingers.
Visit the Rose Empire, where Shai labors for 100 days to save an Emperor. Using Forgery, the power to alter an object in the present by rewriting its history, she hopes to save him, as well as improve the conditions of her quarters.
Scadrial
Take in the splendor of Keep Venture’s grand ballroom; a sight to behold with its polished floors and immense stained glass windows. As Vin and Elend get to know each other, Sazed stands in the corner, ready to protect his young charge at all costs.
Discover the absolutely true, not at all exaggerated adventures, of Allomancer Jak!
Roshar:
A Singer uses the power of the hurricane-sized Highstorm and the spren contained within a gemstone to change their physical form. Beware if they choose Stormform…
During the Battle of Thaylen Field, Honor’s Perpendicularity refuels the Radiants, while the Thrill emerges from the ocean, and the Everstorm comes…
In the realm of Shadesmar, items in the normal world are represented as churning oceans of dark beads. Far above, a Starspren glides serenely past the stronghold of Lasting Integrity, the glowing capital of the proud and noble Honorspren.
Lift… is stealing the Prime of Azir’s dinner. Using her powers to negate friction and become awesome, courtesy of her “Personal Voidbringer,” this Edgedancer glides into the dining room like a skater on ice.
Finally, the top ring features Brandon and Hoid discussing the Cosmere. The room in which they are sitting is littered with souvenirs from the latter’s travels. On bookshelves are the books that currently make up the Cosmere, while five secret projects are hiding in plain sight on his desk.
I attempted to get the figures as close as I could to their book descriptions by using the parts and decals available in Bricklink Studio, with some minor exceptions. The Minifigures I chose to include are Kaladin, Shallan, Adolin, Dalinar, Lift, a Singer, Kelsier, Vin (Mistcloak and Ballgown), Sazed, Wax, Wayne, Marasi, Steris, MeLaan, Shai, Hoid, and Brandon Sanderson. I also included brick-built models or parts representing Syl, Pattern, Wyndle, and a Chasmfiend.
I believe the spirit of adventure and fantasy that fills every book in the Cosmere would translate well to a Lego Set. There are lots of fascinating locations and interesting imagery that provide the opportunity for really cool builds. The Chasmfiend and the Era 1 Scadrial model in particular represent the opportunities for unique builds due to the distinctive designs of the creatures and settings. The Cosmere also has a very devoted fanbase, who crowdfunded the release of four additional novels over the next year; and who have celebrated the news of potential TV and film adaptations. Bringing the worlds of the Cosmere to life in Lego has been such a fun project over the last few months, and I would love to see this be made into an official Lego Set!