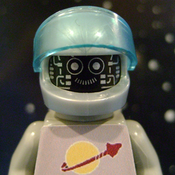 Sign of intelligent life was detected on a new planet,
the nearest ship was sent to make first contact,
unfortunately this planet is surrounded by thousands of asteroids,
making it impossible for a star-ship to land on it.

A plan was elaborated, a small team would be deployed on one
of the bigger nearby asteroid orbiting planet X,
using a mobile launcher truck equipped with an untested
small prototype rocket-ship, their mission, is to find a secure launching site,
wait for the asteroid to be the closest to the planet,
then launch the rocket-ship toward it.

As you may already know, each color suit is for a specific task;
- White for pilots.
- Red for soldiers/explorers.
- Yellow for scientists.
- Blue for commanders.
- Black for spies.
- Green for Exosuit operator.
- And new for the first time, light grey for artificial human (AHum for short).
The AHum is program to do any or all the jobs of the different color above.

For this mission 3 members were selected;
Red will the driving the truck (She love driving big trucks).
Yellow will be in charge of communication (He prefer to drive the smaller ones).
Light grey (AHum), will act as the pilot (He doesn't like being called a robot).
The reason why he was chosen to pilot the rocket-ship is twofold;
First, piloting in the middle of the asteroid belt, is extremely dangerous,
so not to risk a human life, AHUm was chosen.
Second, AHum as knowledge of every known languages, and can learn any new ones
in minutes, making him the ideal candidate for the first contact.
This is a peace mission, so the rocket won't be equipped, nor transporting
any weapons. Only a video camera will be in the trunk.
That also mean that to get to the planet,
he can only avoid the asteroid, not destroy them.

The mobile launcher arrived to the site,
truck disconnect the platform, and move away to a safe distance.
Yellow open the channel to AHUm, give him the order to deploy the platform,
it lift then turn into position directly to the planet,
the mechanical arms release the ship.
They're getting close to the planet, rocket-ship engines are warming up,
the countdown has started...
Zero, the rocket-ship shoot like an arrow from the platform, into space.

Will UHam succeed on getting across the asteroids to Planet X,
if so, once there what will he find?...

After the Exosuit release, I had the idea to do an inspired
classic space project, back to the root of space exploration (peace mission).

I wanted to build something original, stand alone ships was dove over an over,
space vehicle a little less, but a truck transporting a ship that was rare,
that's when I had the idea for the "Rocket-ship mobile launcher".
Also I wanted a diversity in the crew, that's why I chosen a woman, a man and an android.

Right from the start I had a good idea of what the final project would look like,
did not use a plan, everything was done freestyle.
After a few weeks of building and modifying everything several times,
I ended up with what you see.
For me the playability is as much, if not more, important then the look,
so I incorporated as many features as I could.

I choose dark gray instead of light gray, it gives everything a more modern look,
but the built still retain the retro style of classic space Lego.

I wanted a lot of wheels to give the impression of big vehicle moving heavy equipment,
the front truck can easily unhook the platform, I use the train magnet for it,
also the front truck can open the rear to deploy a smaller exploration vehicle (with many tools),
this is reminiscent of those old space Lego set. the top can be easily remove
to give easy access to the mini-figures, if you look carefully at the top picture,
you will see that the smaller vehicle fit exactly, like a glove, inside the front of the truck.
This was redesign until there was no wasted space, and once inside you have a hard time
imagining that it's not part of the cabin. The satellite dish on top can turn 360,
and incline up and down. There is also storage compartment on each side.

The platform, can turn 360 degrees, and lift at a 45 degree angle.
To secure everything during transport, I added 2 sets of arms on the side;
one prevent the platform from turning and lifting,
the other, help to maintain the ship on the platform.
There is a small platform extension that also help to prevent the ship from moving,
and goes down before the launch.
There is 2 storage spaces in the front and rear of the platform.

About the rocket-ship, the top rear can open up, inside there is a video camera
with a tripod that can deployed. Tools can be found on each side of the ship.
There is 2 panels on the front side that can lift,
they double as long range communication antenna, and solar panel.
The front of the rocket-ship that detach, and becomes a probe
that can be use for exploring of remote region, like a cave or under water.
The probe is equip with lights and a front camera, there is also small robotic arms can be deployed
for collecting samples.

If you like my project please vote on it, and share the link everywhere,
help make this set a reality, and as a bonus we would get a new color classic space mini-figure.
Thank you.