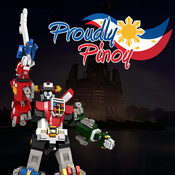 Armored Fleet Dairugger XV is a mecha anime series that aired in Japan from 1982 to 1983. More popularly known as Voltron Vehicle Force, it is made up of 3 assault teams: Kurugger (Air), Kairugger (Sea), and Rikurugger (Land). Each specialized and designed to thrive in the element their team is named from. There are a total of 15 vehicles referred to as "Rugger", which can combine together to form the super robot Dairugger.

The set includes all 15 vehicles, each designed to try and mimic the anime. They can be played on their own or combined with their respective team to form bigger machines: Strato Fighter (Kurugger), Aqua Fighter (Kairugger), and Turbo Terrain Fighter (Rikurugger).

When all 15 are combined, they form Dairugger (Voltron) which stands around 14.5 inches. Below are more details on the teams, the members and which part of Dairugger they form: