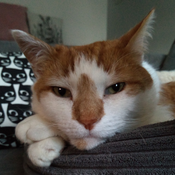 I recently started to collect as many Lego cats as possible and then thought they’d look great in a build. The only thing I could think of was a Cat Café.

I did some research and found the best layout would be with an open front, similar to the Friends Café set. Tan would be the main colour as it works very well with most of the other Lego colours.

I started with a basic plan of where everything would be placed. I drew my idea from the Manchester cat café which has a similar layout. I initially had an entrance area with a desk and lockers in the plan but decided it wasn’t needed here. I just included a set of double doors to stop the cats escaping!

Many cat cafes have quite neutral colour schemes presumably to keep a calm environment for the cats.  But generally, I believe many bright colours are muted down considerably when seen by a cat.

I’ve always loved bright orange and it works well with lime green, so that was going to have to be included as the furniture and rugs. I hope I managed to get just the right amount of variety and detail without overdoing it.

I was spoilt for choice when it came to the cats. There were too many to include so I took a good selection of shapes and colours and placed them in various positions. I really wanted to include the cat called Panthara, but the bright light orange colour just wasn’t realistic. Such a cute cat though.

I’m especially pleased with the sleeping area, and even though the Lego cats don’t fit through the cat flaps, in real-life they would be a similar size and real cats would pass through them very easily.

I think I managed to remember everything… cakes and drinks for the customers; food, water and toys for the cats, and of course a small gift section in the corner. The paw print stickers on the mugs were a bit awkward to apply, and I spent quite some time on eBay hunting down the perfect stickers for the staff t-shirts and the wall art. I’m very pleased with the selection I have chosen.

During the time spent creating all of my recent Ideas projects, I’ve found that I really enjoy designing and building interiors. I think that’s probably the way forward for my future projects.