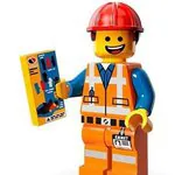 By SteinHDan
126 comments
I wanted to make a quite large, colorful unicorn that could work as a nice display model to have around your home. With rainbow-like colors and a very intense white to make it shine while still being beautiful.
I think the use of the basic LEGO colors really brings back the LEGO playful feeling, while still a model of a size and shape that people of all ages could want as a display model in their home.
I added the minifigure initially to show the large size, but then I really liked how this encounter between the unicorn and the man was captured in the model. I think it looks like they are both pretty surprised by the other creature.
The baseplate is built in four directions and is supposed to make a mirror using black pieces. In real life, it actually looks quite a lot like a mirror. It doesn't come across as well on these renders of the model. I think maybe it could also look good if the base was looking like wood in duotone dark red / dark brown or something like that.
I used the SNOT technique to get the detail into the build, and it's also quite needed to get the legs strong enough even if they are built at an angle. The build consists of a core with panels on the sides, over and under. Not too difficult to build, even if the piece count is above 2100 pieces. There are some technic parts in the core of the tail to keep it strongly connected, but otherwise mostly normal LEGO bricks. It was an enjoyable build for me and I think it could be for many others too.
Technical Specs:
SteinHDan :-)