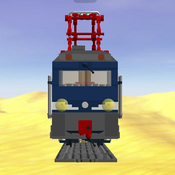 A classic commuter train, which fits almost every European scenery. I always wanted to make a train that represented the mid-20 Century, with a flavour of all trains throughout Europe. This 10-wide stud train, with working Lego versions of Scharfenberg couplers, a fully detailed interior, easy to remove roof and all bogies powered each by a single PF medium electrical motor. This train started when I saw the BHEV (suburban railway of Budapest) in Budapest. This train also inspired most of the front looks, especially the noses of the carriages. Most interior is based on the Dutch Mat' 54, as do the pantographs. However, the color of them are based again on most East-European trains. The colour layout is based on the 50's style of the Nederlandse Spoorwegen ( Dutch railway company). The train is powered by 4 Pf medium motors, 2 in each carriage. 2 IR receivers deal each with 2 motors, plus 2 Batteries hidden away in the bays of the train, 1 for each carriage. This train is fully driveable, although it can't run though the standard curves, and needs longer wider curves, which can be done with straight tracks. This train is meant to be both aesthetic and playable.

Overview of trains that I looked at.

-Emergency brake and a time display