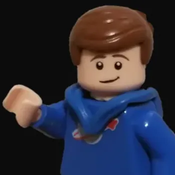 Hold your breath. Make a wish. Count to three.
"Come with me, and you'll be in a world of Pure Imagination... "
Willy Wonka & the Chocolate Factory is a film quite unlike any other. Released in 1971 and starring the impeccable Gene Wilder, it is a wonderful, timeless fantasy that has charmed and captivated children and adults alike for generations. It's delightful, it's intriguing, it's uniquely quick-witted, it's splendiferous, and, most importantly of all, it embodies the spirit and beauty of imagination in a way that very few stories do. With that in mind, what better medium is there to continue on that spirit than the endlessly creative world of LEGO?
Willy Wonka and LEGO have always been two huge parts of my life. Some of my earliest memories are of watching the movie on VHS with my sister, and I've always held the song Pure Imagination as a personal theme song of sorts. Likewise, I've had a special interest in LEGO since I was very young, and ever since I was a kid I have always dreamed of seeing the two combined. The set that you see here is the culmination of that dream, and with your help it can be fully realized as an official LEGO set!
This model, as proposed, is built from exactly 1400 LEGO elements, and includes:
If you want to see this concept turned into an officially released LEGO set, please click the yellow support button (right on desktop, above on mobile) and share this project around online using the hashtag #legowillywonka . We need 10,000 supporters for LEGO to consider turning this concept into a real set - a hefty challenge, but together we can make this set a reality!
This set concept was built and rendered in Bricklink Studio 2.0, with a handful of LEGO pieces not natively available in that software having been imported from Mecabricks.
Thank you so much for your support! If you have any questions or feedback regarding this concept, don't hesitate to rate and comment. Please check the "Updates" tab to see any updates and additions that have been made to the project since the original upload. I hope you find this project to have captured the spirit of Pure Imagination.
In your wildest dreams you could not imagine the marvelous SURPRISES that await YOU!