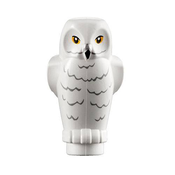 There are around 200 different species of owls in the world. This model represents a Long Eared Owl, but could easily be changed to a Tawny Owl by removing the ear tufts. By changing the feather colouring, you could also build a Snowy Owl or a Barn Owl.

The parts in this kit could build either the roosting owl with tree branch and stand, or the flying owl. While most of the parts are the same for both models, some parts are specific to one or the other (for example the tree leaves).

The roosting owl sits camouflaged on a tree branch, which owls commonly do to relax when they are not hunting, both to save energy and avoid being seen by prey or predators. In real life, owls can turn their heads on all angles to keep an eye on their environment. In the Lego model, a turntable joint in the neck allows the roosting owl to rotate its head to the left or right.

Owls are famous for their near-silent flight, which they can achieve thanks to special fine-combed edges on their wings. Owl feathers are often striped, which helps to camouflage the bird. On the model, the striped feathers can be seen both on top of and under the wings. The top wing surface is reddish brown and tan, while the bottom side is white and tan. While hunting, owls use their extremely strong hearing to hone in on their prey. Some owls may rotate their heads to check the source of a sound. Because sound is so important to owls, the Lego flying owl model can also rotate its head.

To transform the roosting owl into the flying owl, remove and disassemble the tree branch and base. Use these bricks to build the owl’s wings. The torso has the same construction in both models. The owl’s head is reattached at a different angle to allow it to face forwards while flying. The turntable joint in the neck is retained, which means that the Lego owl can still rotate its head. The wing position can be adjusted using the hinge bricks at each join. The flying owl also has a longer tail. The position of the outer tail feathers can be adjusted.

This is my very first Lego Ideas project, and I would love to get as many supporters as possible. If you like this model, please support and follow! If you have any comments, please feel free to post a question.