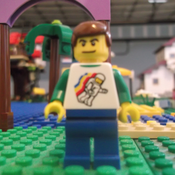 This is my LEGO model of the solar system.

This project started as a science project for school.  Initially, I knew I would end up sending it in to LEGO Ideas, but it took a lot longer than I expected to finally get my model to where it is today.  the Model consists of every planet, the Sun, and a spinning cradle.  There is a small crank at the base of the model which, when turned, will spin the entire model.

I put a lot of effort into adding a lot of detail into the planets, from Saturn's rings, to the crater on Jupiter.  Also, all of the planets are in order by distance from the Sun (mercury Venus Earth Mars Jupiter Saturn Uranus Neptune.)  Each planet has it's own spot on the cradle, and each planet can spin on it's axis.  I hope you enjoy this model as much as I do, and I would very much appreciate your support and follows to help make this an official LEGO set.  Thanks!