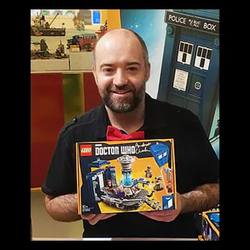 I think Thunderbirds Are Go translates well into LEGO, would be a good display model, and has a good amount of playability.