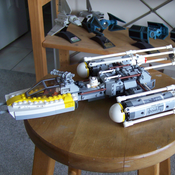 In 2032 when the United Earth Alliance was suddenly and unexpectedly attacked by unknown alien forces, the Ragnarök Defense Program was initiated.  Part of this innovative system was a fleet of one-person interceptors that were devised to patrol Earth and its colonies – The Moon and Mars – to warn of impending hostile action from alien forces.  Although unarmed, these small, fast and manoeuvrable craft, called the ADX-42 Alien Defense Interceptor, would be the UEA’s early warning system and “engage” the opposing forces until larger, more capable warships arrived.

Key to the design of the ADX-42 – which, being the first under the program, eventually gained the name of “Ragnarök” – was its dual-power system consisting of a large, centrally-mounted jet turbine complimented by two of the latest powerful ion thruster engines on the ends of the wingtips.  This allowed the Ragnarök to operate both in a planet’s atmosphere as well as in orbit or deep space.  The mid-mounted trapezoidal wings were large enough for the thin atmosphere of Mars, as were the twin butterfly tail units – which could fold down for docking with larger space vessels.  The large, front-mounted cockpit allowed the pilot an exceptional view, and featured an opening canopy.  It is worthy of note that after the adoption of the innovative Ragnarök Defense Program, the alien incursion ended as suddenly and unexpectedly as it had begun.

The model was built utilizing LEGO Digital Designer (LDD) 4.3 and uses many standard LEGO parts with very little in the way of Technic bricks or parts, which will help to lesson both the cost and add to the ease of the overall build.  Although 24 cm long, due to the large wing parts utilized the model has a low brick count for its size.  I chose grey (although its actually supposed to be silver) as an overall colour, but could be any if accepted for production.  I added a dark grey nose to add some “colour” and to indicate a radome, and the rear sections of the ion thruster engine nozzles are red to indicate danger.  As well, United Earth Alliance stickers (logo) could be added.  I made the model “unarmed” so as not to be a weapon of war, but spring-loaded shooters for defense could be added under the wing mid-span if so desired.

The canopy opens and there is a detailed cockpit with a seat for the Minifig pilot.  The chin-mounted jet intake has a black interior to add to the realism.  Although, initially, I attached the butterfly tail unit via hinges to get the appropriate angle of 45 degrees (I just happen to like this tail design), the “hinged” element could be added to the play-ability of the toy for docking or other scenarios.  While the Minifig pilot resembles “Benny”, I actually made him in blue to indicate Air Force Blue and I gave him the name of Major Davis.

In the photos I have shown the ADX-42 Alien Defense Interceptor in space as well as landed on Mars (one of its bases), as the craft can operate in both space and in a planet's atmosphere.  The always happy Major Davis is seen waving.

Please “share” this design so as many followers as possible can view this concept.  Any comments or feedback is welcome.  Thank you.