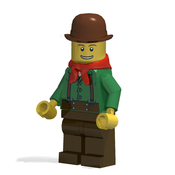 Ascend the coach box and take apple and carrots to the next train station. Load them into the freight car. Close the sliding door, enter the passenger car and enjoy the trip to the next city.

The steam engine bases on the German steam engine https://en.wikipedia.org/wiki/Prussian_G_12. These engines were manufactured between 1917 and 1924 in a total quantity of 1.478. The last engine retired 1976.

Most German steam engines had a red chassis, and so my LEGO steam engine has too. But only in CAD, LEGO train wheel pair, RC train motor and its decorative side are not (yet) available in red. The last LEGO buffer in red has been produced 30 years ago for set 7715.

The G12 was usually equipped with a three axle tender, but I decided to take only two. So the tender stays short and does not require special design to make the third pair of wheels movable axially.

I did not like the plain, high gloss surface of the tender, so I decided to take bricks with studs on sides. These studs symbolize oversized rivets.

The freight car consists of a black, riveted steel frame with wooden boards. This design continues the design line of the tender with oversized rivets.

There is no real model for this carriage, I just watched several pictures of carriages and then built this one. As the freight car the carriage bases on a black steel frame with some oversized rivets and wooden boards.