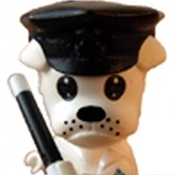 We have visited the Lion House as part of the tour through the LEGO Idea House and Museum on several occasions. To us the Lion House both has the history of the company and the architecture qualities to be made into an official LEGO Architecture set.

The set is made with all the bricks to make either of two different versions from different times. First the “old” version which is designed with roof hatches, the brown wooden front & side door and the shop window with “LEGO FABRIKEN” (LEGO Factory). The second contemporary version has the plain roof, white door and windows.

The roof is removable and inside you’ll find the true history of LEGO - a tile with the patent application from 1958 for a toy building element, a panel with the LEGO Group's motto “det bedste er ikke for godt” and a red 2x4 brick.

It’s built on a 16x16 studs plate and has around 450 pieces. All the pieces are in current production but some has to be produced in so far non-released colours. The dark orange coloured bricks for the roof will also be a great contribution to the house and city builders out there. There are five pieces with print, the old shop window, two tiles with “LION HOUSE” and in Danish “LØVEHUSET” and the tile with the patent application and a panel with the LEGO Group’s motto.

We vision the set coming with an additional booklet with pictures and text from the LEGO archives about the history of the company and the house.

The LION House can be seen as the core of the LEGO brand, the place where it all started.

Ole Kirk Christiansen started with wooden toys in this house and his son Godtfred took over in the same place with producing the plastic bricks we now know and come to love.
Here is your chance to own a model of this piece of LEGO history.