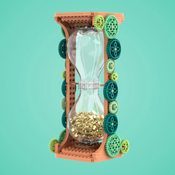 By Brick Dangerous
155 comments
In 1931, there was a peaceful island where there was a lighthouse and a lighthouse keeper.
The dream of every lighthouse keeper is to be calm and do his job well to guide the boats and get them to their destination.
But one day, taking a walk around the island, the lighthouse keeper saw a small cavity in a rock, in which there was a precious stone. With the help of a sword, he managed to push aside the vegetation and gain access to that precious stone, but as soon as he touched it, a cave of enormous magnitudes emerged from the ground and guided him. Leaving the gemstone intact and leaving the island in ruins.
The mud cave monster had just reappeared, an ancient curse known only to one tribe.
Some time passed and when they did not know news about the lighthouse keeper, an expedition of explorers went in search of him, what they did not know is that just upon arrival they would find the warriors of the tribe protecting the stone and much less would they know that the monster was also waiting for them from the mud cave!
This set is a tribute to all the 80s adventure books and movies that have inspired me so much to create this design.
In total the set has 1889 pieces.
I hope you like it, appreciate every detail, and have as much fun watching it as I had fun building it.
Thank you for reading this far. I look forward to your support and I send you my best regards!