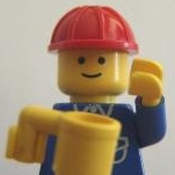 "Wait a minute....these aren't magic statues are they?" -- Bandit
In Australia (and now around the world, on ABC iView or your favourite Disney streaming platform) there is a cartoon called Bluey.  It depicts the everyday life of the titular anthropomorphic Blue Heeler, her family and friends. However, while clearly intended for children it has also become a huge hit with adults (myself included) due to its engaging and very relatable stories and characters..
Why did I build it?
My decision to design the Bluey Brickheadz came about from a combination of factors. My wife had purchased a couple Brickheadz as a gift. At about the same time our family discovered Bluey and so while building the Chewbacca Brickheadz it hit me that Bluey would translate very well to that format.  It took me a while to finally put the wheels in motion, but I eventually sat down and squeezed out my first iteration of the model in Stud.io.  After much messing around and further iterations, I am now here and ready to share.
If you're interested to see how I got here, you can see the pictures here: https://flic.kr/s/aHsmKTvqDC
Why would this make a great LEGO set?
The Bluey Brickheadz model would make a great LEGO set as both share common messages for their viewers/fans, such as:
With a part count of approximately 130 pieces and dimensions that match the Brickheadz format, this fun model will make for an excellent addition to any LEGO collection.
What is the story?
Originally the model was simply of Bluey. However, the more I looked at the model I realised that there was something missing.  Bluey, although cute, seemed to be missing a story.  After watching a few episodes with my kids, it was clear what was needed to give the model a narrative.
The xylophone that Bluey is holding is from the first episode, The Magic Xylophone.  It has the power to freeze others.  Bluey and her sister, Bingo, squabble over the xylophone as they freeze and unfreeze Dad.  So much so that Dad gains control of the xylophone and freezes Bluey.  However, after resolving their differences and sharing the xylophone Bluey and Bingo entrap Dad and turn him into a water fountain!
Thanks you for checking out this project!
I hope that I have your support.  With your click this project can reach the coveted 10,000 supporters to be considered for production!
-- Tim