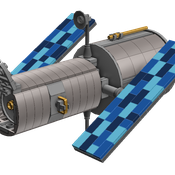 The Hubble Space telescope, launched aboard the Space Shuttle Discovery in 1990, has provided scientists with millions of datapoints and has helped broaden our knowledge and understanding of the cosmos. Pictures like the Deep Field Image and the Pillars of Creation have inspired countless people to look to the stars. This model attempts to capture some of that awe.

The Hubble can be displayed in a variety of different ways. The solar panels are fully posable, the antennae are rotatable, and the front lid can be closed. I have also designed a stand that can hold the Hubble. On the off chance that this ever reaches 10k, I think it would be cool for LEGO to include some printed bricks of the Hubble's images, similar to what we got in the Women of NASA set.

Thank you for taking the time to read this entry. Any support means a lot to me.