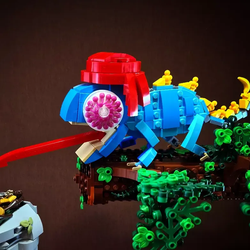 By SJs Workshop
70 comments
This set tells the story of an explorer living on an island, after he and his dog were left stranded...
He has left his mark on the natural landscape, with signs of his inhabitation scattered across the island: A small campfire sits on the beach, a candlelit wooden stairway leads up to the entrance of his cave, a lantern hangs to light the scene and a small telescope looks out over the horizon.
Inside the cave, a bed made of wooden planks is suspended with chains, and can be lifted to reveal a small opening, through which he can descend a roughly cut ladder into a secret storeroom, containing supplies and treasure. The wooden doorway and window have been inset into the rock face, which has been moulded and hollowed with a pickaxe.
I built this after being inspired by the Lego Ideas “Tree House” and “Pirates of Barracuda Bay” sets. I love the story-telling in both and wanted to create something that really captures the imagination. There is lots of potential for play, but this is also a good display piece, I hope you consider supporting this project :)