- The Legend of Zelda Project - 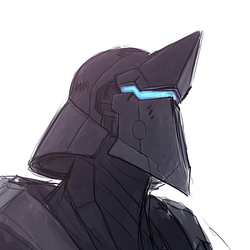 By Ragaru
16 comments
The LEGO: “Legend of Zelda” Project

A second attempt to bring Zelda and LEGO together as one!

And for the sake of every Zelda and LEGO fan, support WesTalbott's wonderful Ocarina of Time based LEGO Project, Iron Knuckle Encounter

Also check out my little

-As for you believing this to be a copy of Michael Inglis (Mingles) marvelous Zelda Project, you are wrong!
I started planning and designing ideas for this project, as far back as early December 2011, before Mingles' project was up.
Nor is it the same direction as Mingles chose, I aim for a more realistic Zelda style, such as The Legend of Zelda: Twilight Princess presented.

With Mingles' Zelda Project failing to pass the review, the weight of his project has now fallen on this one.
Having new parts that would be essential to fulfill the project/set's vision is what caused Mingles' project to fail, therefore I will firstly see what is possible to produce with the existing parts and colors, before I suggest any new pieces that would be required to fulfill this project.

I will rather rely on prints(or stickers should it prove to be the only way), to achieve the most authentic Zelda LEGO, following the CUUSOO standards.
That by an average, leaves a set consisting of 425 pieces, but in the case of extensive figure design (body, head and equipment/gear prints) it will most likely reduce the set to 1 standard Minifigure, some enemies, and an environment suitable for the context.
This is to assure that this project will have a greater chance of fitting within the CUUSOO budget.

In the time forward I will, do what I can with the time I have, in order to present a final product prototype.
But as I wish to help this become the most ideal set for all Zelda/LEGO fans out there, I appreciate constructive critic so that I can improve it towards something that everyone would want.

This is however something I can not promise, as we will have to settle with a visual style, to avoid any conflicts with the context of the franchise.
As I believe that it in Nintendo's eyes would be a negative point to have elements from different games put together in one style, as Nintendo is very strict when it comes to the licensed product quality checks.

So that being said, I would like to express my current plans and ideas.

Visually I will most likely settle with the Twilight Princess direction, as it holds a greater focus on details, and the colors are bleaker which as a set answers to the direction we have seen in more recent licensed themes such as The Lord of the Rings and The Hobbit, and Pirates of the Caribbean, which I personally find very appealing.

Many would want Ocarina of Time, Wind Waker or Skyward Sword variations of the characters.
I would personally prefer a set featuring the final battle from Ocarina of Time with a brick built Ganon (which I to some extent have experimented with), due to the the sheer scale and epic feeling the battle in itself was... But as I've stated, TP appeals strongest to me visually so that is what I will put forth as a suggestion. 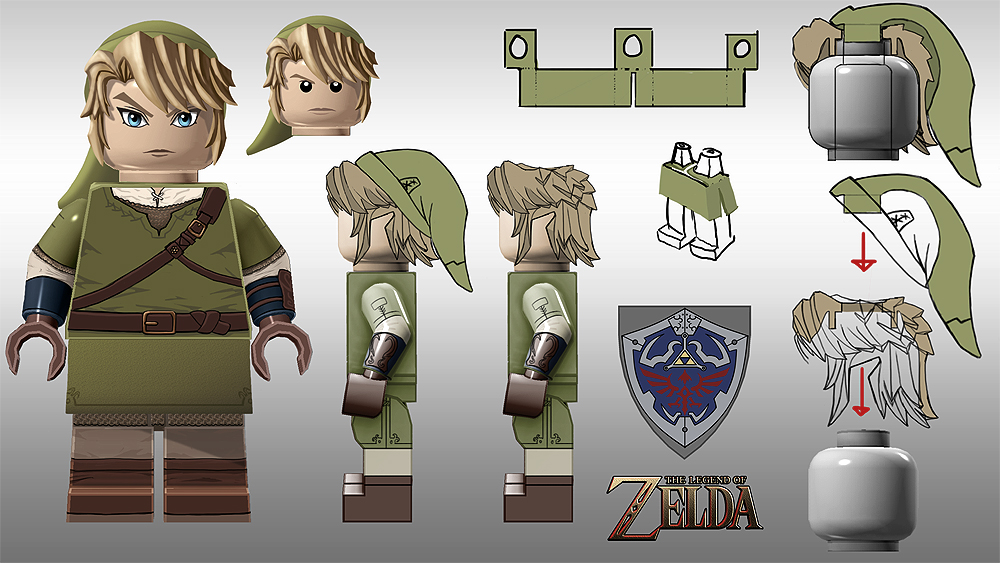 (I must apologize for the chaotic and sketchy layout, time really isn't on my side.)

With the new Olive Green introduced in 2012 I find it to be a perfect match for Link's Hero Tunic!
The torso, legs, and face prints are the most likely ones to be produced, but I would hope for printings on the arms and the sides of the legs as well.
The face may feature two different versions, one of the game accurate rendition, and one of a stylized LEGO version, this to meet the desires among the fans.

The cap/hair piece is the greatest dilemma of this entire project, no existing LEGO piece features the quality of both such hair and a cap, so it will either be a hairless cap wearing Link, or a Link with no cap at all.
One option is to have the hair printed onto the face, but from my point of view, it is not proving a suitable solution, an unique face print, may by many be desired for other use than just Link, and it may prove somewhat versatile.

If possible, I would suggest one single hairpiece with cap to be produced, alternately if the design itself should not prove versatile enough for LEGO's part gallery, then, although unlikely, it could be 2 separate parts.
One hairpiece that could go along LEGO's standard collection of hair, and one cap piece that could be connected on top of it.

Connection methods could either be like the LEGO Friends hairpieces, with a tiny peg hole in the hair and a peg on the headgear.
Or better, a slightly wider peg so that the cap can fit into the stud of a minifig head alone, and easily any other part that has the same diameter.

I see the latter option as the most versatile and attractive one as It would give one new hair type, and a cap that could be used for Medieval/Fantasy themes.

The truth is, despite the grand selection of parts LEGO has, there really aren't a good option to these kind of pointy caps, and seeing how popular the Zelda theme is here at CUUSOO, having such a piece realized would allow many ideas to more easily be made a reality.

And so far, with 144 unique collectible minifigures produced the last 3 years, we haven't seen any part that could at all be similar to the iconic silhouette of a pointy cap such as Link's.
The "Gnome" minifig may be the only of similarity, but the shape is entirely wrong.
Such a Cap piece could suit Goblins, Dwarfs, Elves, Wizards and so on!

The Master Sword is another yet minor problem, as the only sword holding some similarities is a shortsword, originally introduced among some of the LEGO Heroica sets.
The alternative may be to use the more recent longsword, commonly seen in the LotR sets.
It does as well have a striking similarity to the more traditional looking "Ordon Sword" from Twilight Princess.

The Hylian Shield, will simply require a printed triangular shield in a metallic color.

As for carrying his equipment, I have not found any practical or visually appealing way to store them on his back.

Concerning the tunic's lower part, it may be a simple print, but it could in addition be possible to use a cloth piece, such as the Collectible Minifigure Bagpiper's kilt in Olive Green, or the Hula Dancer's skirt... Including both would be the best solution.

The legs should preferably be in brown, because the boots would be in their natural color and would cover all the sides, which looks more natural as the underside of the foot would be in the correct color.
The downside is that the lighter beige color of his pants/tights may be somewhat transparent due to the darker underlying color of the plastic.
But if in beige, it would require a larger area of brown printing of the leg's surface. 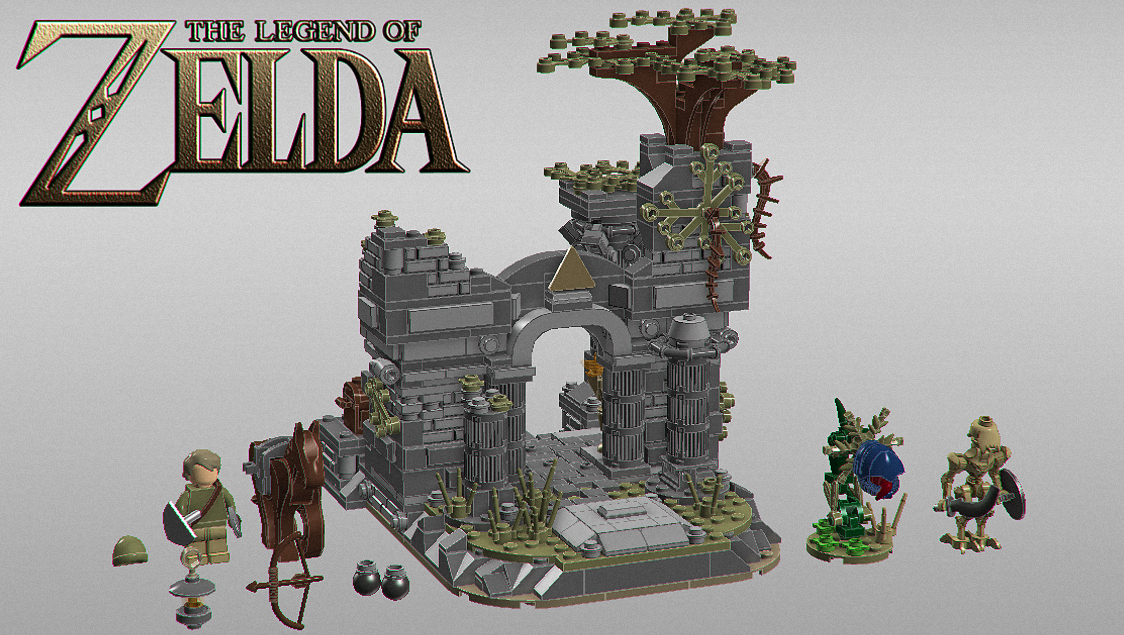 This would be a more or less ideal set design, if an extensively detailed model could be produced. At least it would keep more of the Zelda essence and quality in the build.

The set is by itself not as important as the minifigure, it could simply be a small base with ruins to display the Link minifigure in all it's potential it's glory!

Unfortunately Zelda and Ganondorf will be excluded in order to increase the chances of this project passing review, as I believe Minifigures makes an impact on the budget CUUSOO currently operate at.

I've decided to take inspiration from the Ruins of the Temple of Time, found in the Sacred Grove, and a little from Hyrule Field where Link rides through the landscape on his trusted steed, Epona.

Which has lead to the current prototype you see presented.

It will feature an exterior and an interior, both with their respective type of enemies.

As for items I have chosen to include recurring items such as the Lantern, Bombs (which are effective against the Stalfos), and the Hero's Bow.

The interior will feature a chest containing an item, or a Dungeon Key, which Link must acquire in order to continue deeper into the dungeon.

In addition there will be the infamous Pots for Link to break without hesitation, climbing vines and the hostile spider enemies known as Skulltulas. 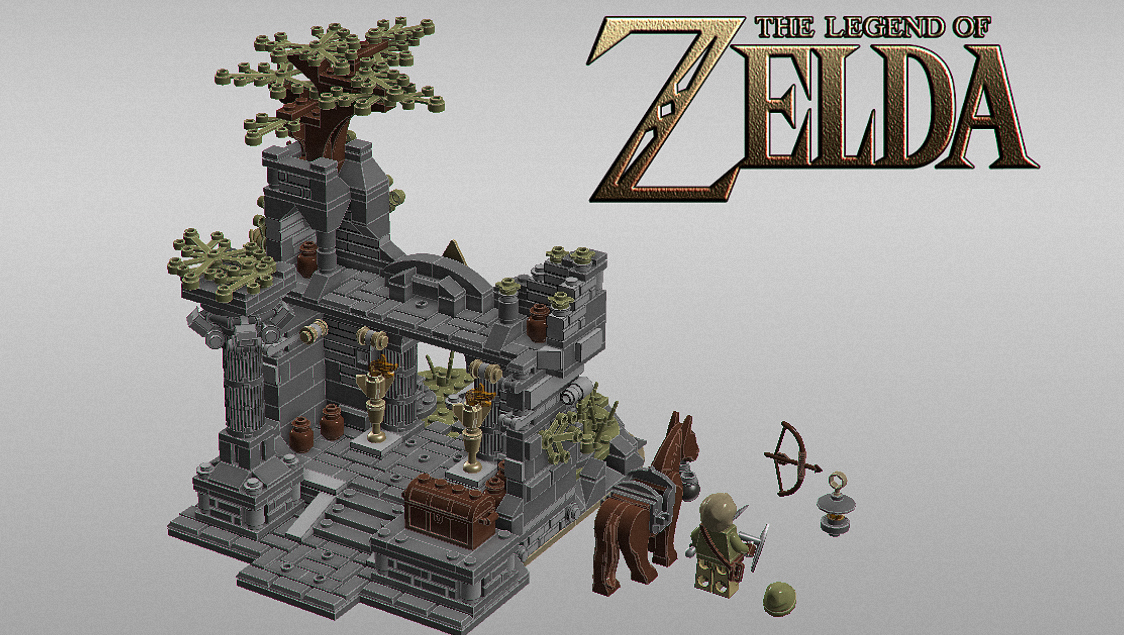 This is of course larger and more detailed than what an eventual set would be, so I will naturally have additional renditions of a smaller scale made accordingly to this design.
Alternately include some design variation to apply playability to the scale that would best fit CUUSOO.


Here's one example of a simplified version: 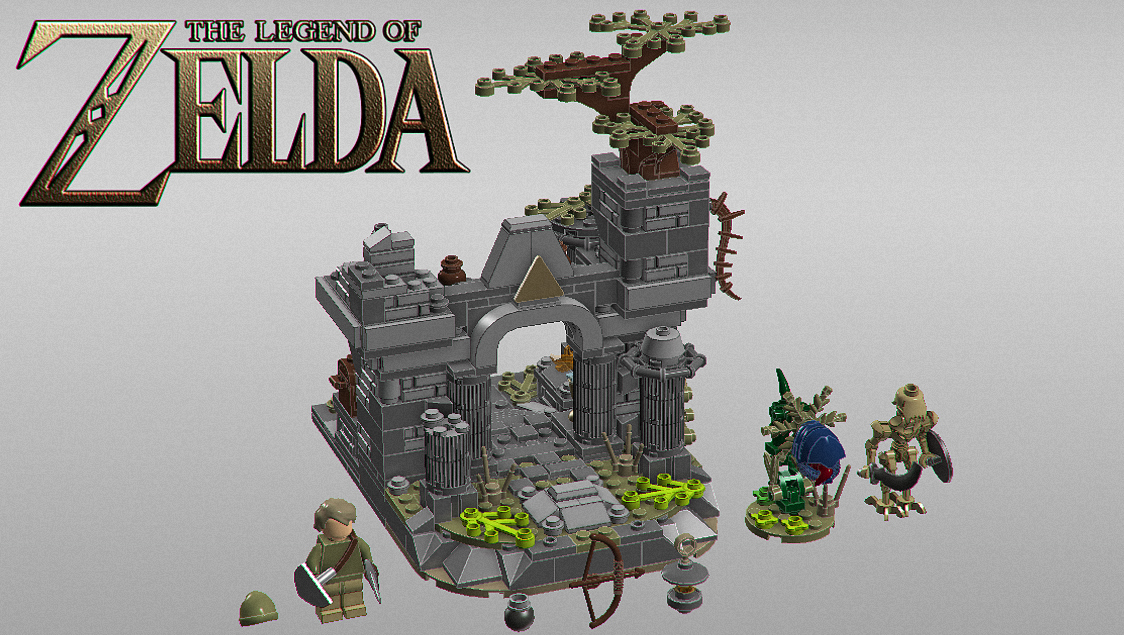 This is a start, and we have to start somewhere, and what is better than The Green Clad Hero himself?

As I said, the Minifgure is the most important aspect of this project, and having just that one produced would allow The Legend of Zelda to spread throughout the world of LEGO!

And thinking further, should this project reach 10000 AND pass review, so that we finally could get our hands on them, well then there would be nothing stopping us from suggesting more Zelda sets, Temples, Dungeons, castles, bosses, moments from the Zelda universe that has stuck to our minds and in our hearts!

I have this as my current suggestion, hoping it may be the fire that will rise and expand trough the hearts of LEGO and Zelda alike, from the spark Mingles ignited, as a result of the genius of both Nintendo and LEGO!


Should it fail for reasons other than the license, then Wes Talbott's Project will be the next hope for the union of LEGO and Zelda.