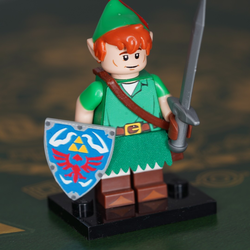 The Lighthouse of Alexandria was one of the longest standing of the Seven Wonders of the Ancient World. For a substantial period of time, it was the tallest structure in the world—coming in at roughly 120 meters tall. Built around 250 BC, the Lighthouse stood for over a thousand years until it was badly damaged in an Earthquake around the year 1000 AD. Remnants of the lighthouse remained until two more earthquakes in the fourteenth century reduced it to rubble. Towards the end of the fifteenth century, the ruins were removed to build the Citadel of Qaitbay and the Lighthouse's near 200 year legacy ended.

The descriptions we have of the Lighthouse are consistent and specific, giving us an accurate depiction of what the magnificent Lighthouse may have looked like.  Quite frankly, it's shocking that it hasn't been depicted in an official Lego set yet. The Lighthouse would make a wonderful set in the vein of the architecture series. and would look absolutely gorgeous sitting on a shelf.

My model here uses roughly 500 pieces—something that could easily be reduced using some pieces not available in Lego Digital Designer. The set would probably cost $40 and would stand over 9" tall. The base I made stands about 6 3/4" x 6 3/4". If there is interest, in an update I would likely to examine the dimensions of the Lighthouse more closely and ensure an even more accurate representation that would be fun to build and look great on a shelf.

The Lighthouse is most certainly called The Great Lighthouse for a reason . . . I hope you guys find it as fascinating as I do!

Check out my other projects up on Ideas!: