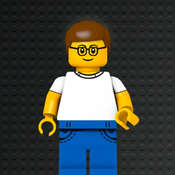 If my home were to catch fire and all I could save were a single possession, it would have to be my LEGO Ultimate Collector's Series R2-D2. The reason? It represents one half of my favourite duo from the film STAR WARS, modelled using my best-loved childhood toy - it is also testament to just how thoughtful my wife is since it was she who bought the model for me one Christmas.

On completing the model - which now takes pride of place in my office - I have been waiting for the day when I could complete the partnership by purchasing a scaled version of R2's sidekick, C-3PO.

As a result of my frustration at the growing number of failed internet searches and spurred on by the documentary The Secret World of LEGO, which interviewed the designer of the LEGO Birds set, I decided to take on the challenge of creating the model myself.

The finished result has taken somewhere in the region of 10 months to develop. The model comprises of over two-dozen sub-assemblies, is constructed from just under 3,000 bricks, stands 59.5cm / 23.5" tall, and weighs in at a little over 2Kg / 4.5lb. The waist, arms, and head articulate and are sufficiently stiff that the model can maintain various poses such as those in the accompanying images.

I have also played around with different configurations of silver lower leg and red arm as featured in some of the later films. Another point to note is that not all of the bricks used are available in a suitable colour and remain black as per my original prototype.

My goal was to simply create a model for myself. However, I am sufficiently satisfied with my efforts such that I would like to share my work with the wider LEGO community. Who knows, if I'm lucky enough to win your support in the numbers needed to reach the review board then maybe, just maybe, I can get the model produced in the correct colour bricks.

Thanks in advance of your support, Julian.