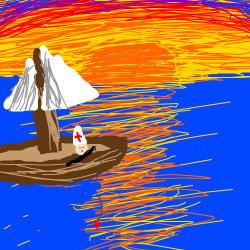 Have you ever wanted your own LEGO Cargo Ship? Well, I have, and I'm sure lots of other kids have too! I designed this cargo ship because I feel like LEGO needs a newer version of a cargo ship, which is now retired. This set has 756 LEGO bricks. The pictures may not be the best but it's all that I could do on LEGO Digital Designer. I did not add any minifigures because on LEGO Digital Designer there were none that would match this ship very well. I hope that if this reaches 10,000 supporters, that the designers would add some of their own, 2 boat captains/drivers, one for the tugboat and one for tha main ship, a crane driver, 3 other workers, a shark, a crab, and an octopus. There are two opening containers which both have smaller containers inside and there is one container that does not open. There is a crane which has multiple moveable arms to lift up the cargo containers. There is a little station for the crane driver with 2 levers for full control. There are 3 extra seats on the boat for the wokers to sit on when they're traveling. The boat driver has a steering wheel and some panels for control of the ship. The tugboat driver also has a steering wheel and panels and even a lever. The reason I put a tugboat is because if you've ever seen a cargo ship in real life, they always have one. I don't know why but LEGO never adds motors to the back of large boats but I decided it looked like it actually gave the boat power. The motors can be raised up an down into water. I spent a lot of time, hard work, and effort into builing this so I would really appreciate if you could spend a little time to support this. Thank you very much and happy building!