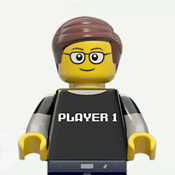 Long ago, in a distant land...

This set is my attempt to capture some of the unique essence of Samurai Jack. High atop a remote peak above white clouds crowned with pink blossoms, Jack struggles to reach a portal through time - hoping to "return to the past and undo the future that is Aku." However, Jack is waylaid by a host of enemies, minions of Aku, and must fight his way through with the help of his faithful friend, the Scotsman, before he can hope to complete his quest. Aku, too afraid of the samurai's sword to intervene himself, watches from afar - a looming evil in the background.

The foreground (mountain peaks) and background (Aku's lair) can be seperated for display and/or play. The foreground play features include a rickety suspension bridge (reminiscent of the bridge where Jack and the Scotsman first meet), a small cave with overhanging ledge, and a gateway housing a time portal (which, given how this usually goes, will probably be destroyed by Aku just before Jack can jump through.) The background portion has a small promontory, where Jack can stand to face the looming master of darkness.