Beyond the Brick Interview

I plucked up the courage to do an interview in person with the lovely Beyond the Brick team, enjoy!
On Jan 31, 2021

Greetings all. So I thought I'd update the cover image to show more detail about the project from the get-go, with an Eagle lifting off having dropped a pod and with the buggy on its way out to explore. I'm honestly not sure if she'll get to 10000 from here but 5000 would be a great result. So if you can share around and about that would be greatly appreciated, and do reach out on Twitter if you have any ideas for new cover images - there's a long way to go yet! Thanks for all your support!

A massive thank you to everyone who's voted to support so far, I'm still picking my jaw up off the floor as there's been a bit of a surge towards 1100 supports off the back of Facebook posts thanking people for 1000 supports! The set will now see breakaway day this year, and will still be gathering support into 2022 which is terrific! Hopefully there'll be chance to get it out into the wild a little more soon too. Thank you as ever for all your support, please do share the project and let's see how long it takes to hit 5000!

Merry festivities to one and all. As the project approaches the 1000 mark (thank you!) and we approach 2021, I thought I'd leave you with a size comparison as I recently completed the rather epic 1989 Batmobile! Have fun! 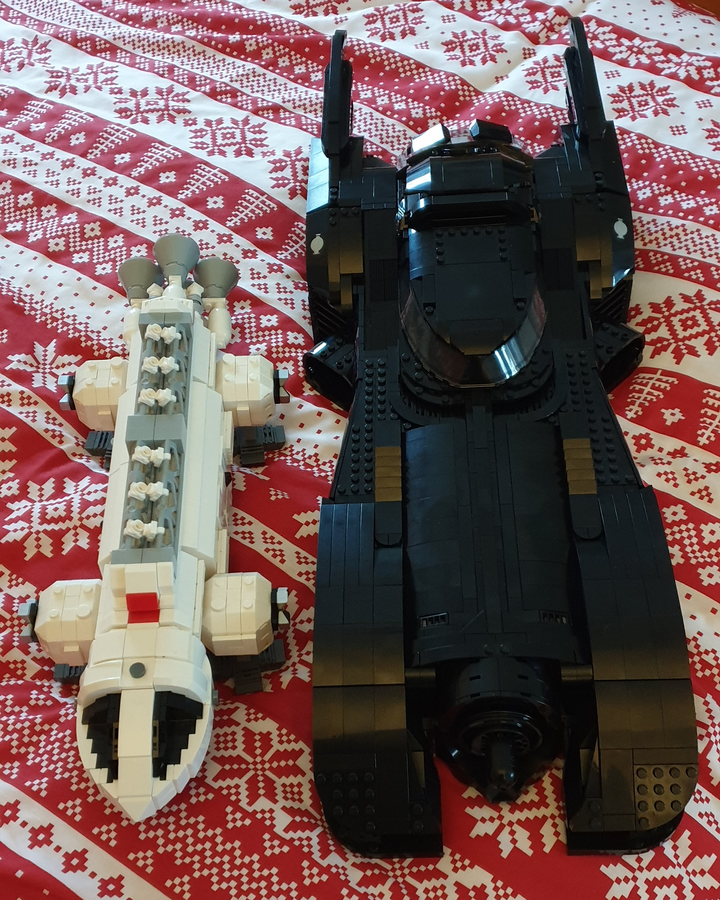 So I've been brave, and you can now hear my dulcit tones as I show you my prototype in action (!) and once again as Club Brick has very kindly pulled together another video with a voiceover from yours truly. Enjoy, and please spread the word! Thank you!

As I've mentioned before, once upon a time I had a Dinky Eagle, die cast metal and plastic, and I only let it go about 15 years ago - they date from 1975. Now, you remember that Starfighter I showed you last month? In the same store, buried under other Dinky items, I saw a very familiar command module. In a box. This was not a purchase I made immediately because they don't come cheap, but I realised on seeing it out in the open that it was probably a first edition Dinky Eagle Transporter - essentially identical to the one I let go of 15 years ago, but in far better condition. Well, it would have been rude not to, and so here is my 2020 LEGO Eagle Transporter alongside the 1975 Dinky Eagle Transporter. It's a funny old world! In case you're wondering, no, the Eagles were never actually green in Space 1999 - but apparently Dinky felt kids preferred toys with more colour. I'm not sure LEGO do the all the necessary parts in green, but let me know in the comments if you want me to CGI one up! 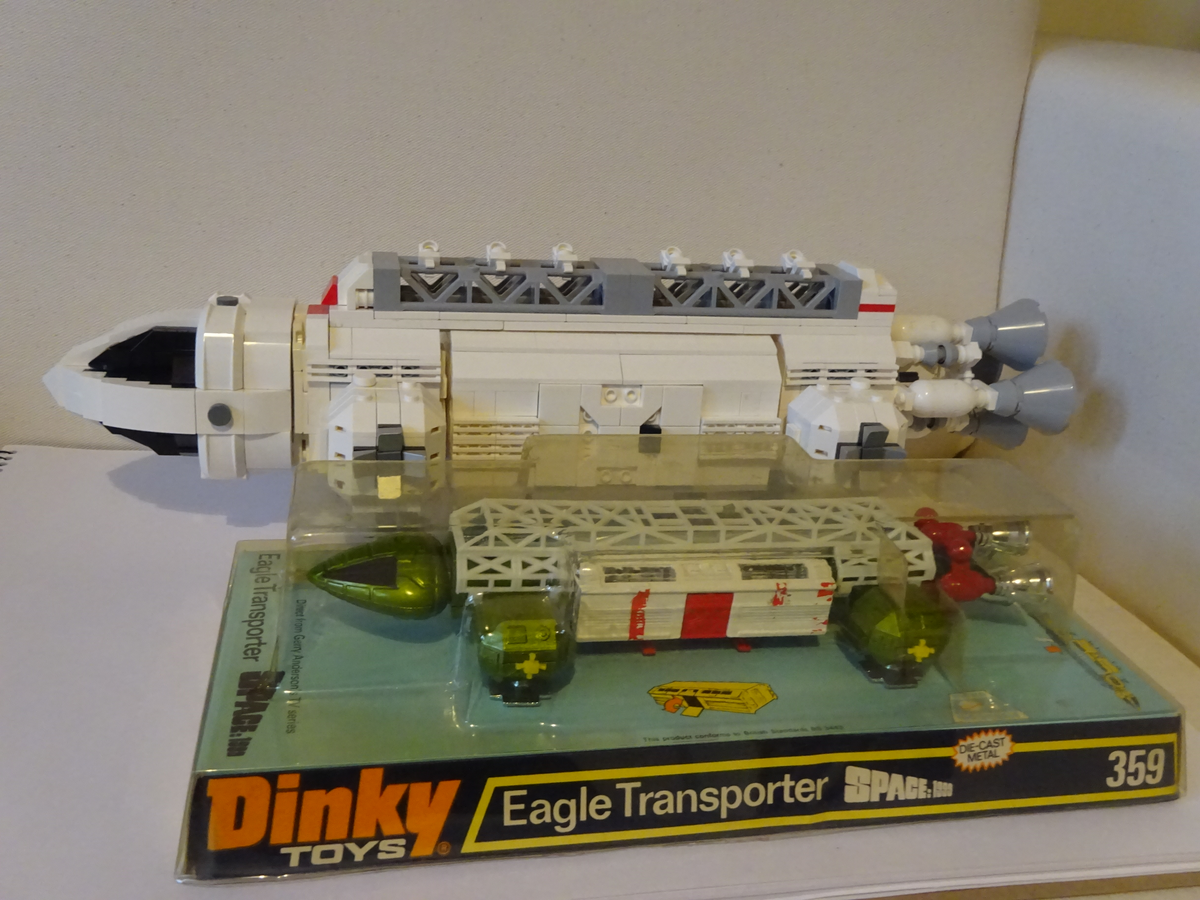 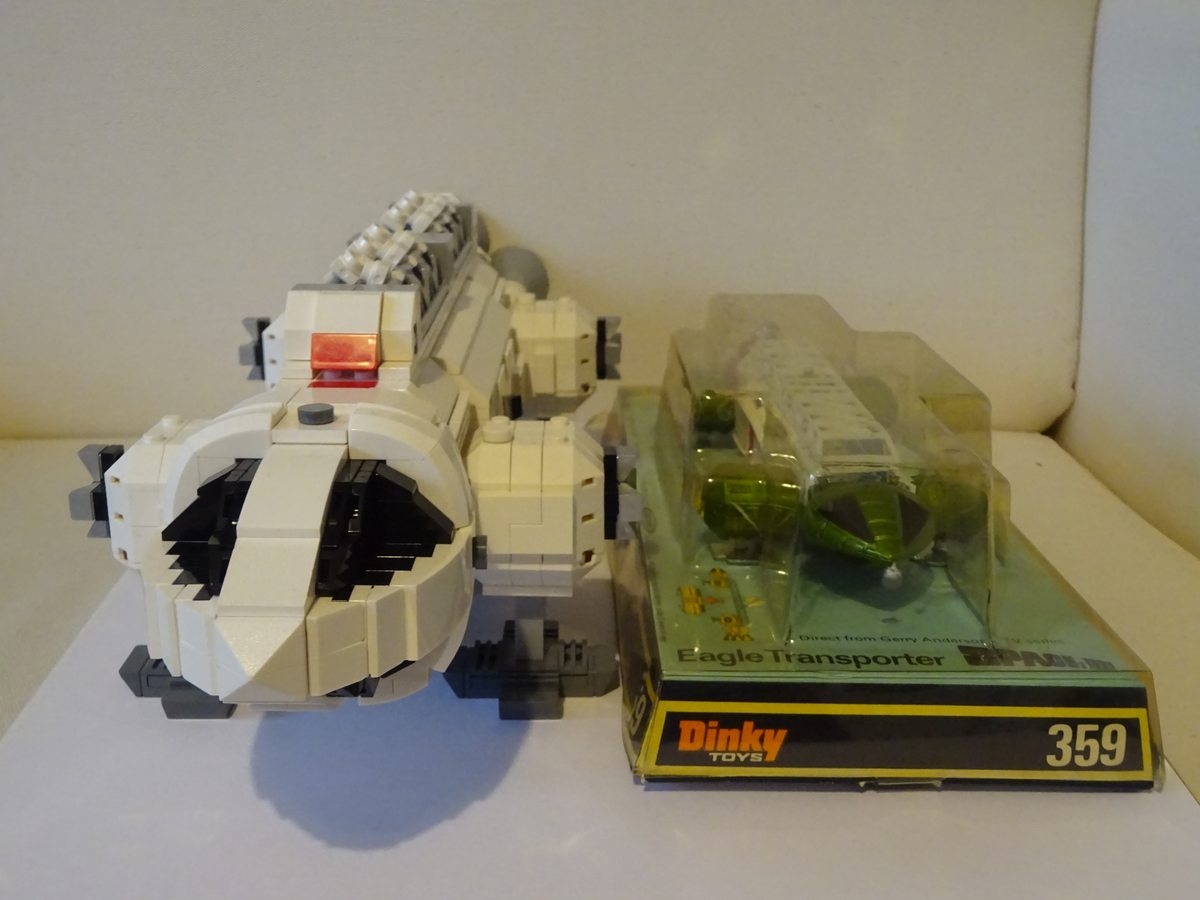 The Eagle with some old friends!

Thank you for all your support, she's edging towards 1000 supporters and more time which is wonderful! I thought I'd share this photo with you, as I just tripped across another old friend in a local store that sells nothing but old toys - it's the big Buck Rogers Starfighter from 1980, made in Great Britain by Corgi no less! Accompanied by Stingray and a Titan Terror Fish who have their LEGO Ideas counterparts here already of course. Have a great Halloween! So here we are, just before the 21st anniversary of the Moon being blown out of Earth's orbit in Space: 1999, some real world photos of my prototype! Still not quite identical to the digital and still some things to try out, but you'll perhaps get a better idea of the size from these images, and the final image shows it can be held by the spine, no strings attached! It comes in at about 16 inches long, which is the same sort of length as the minifigure scale X-Wings. That's the thing with working digitally, I find it feels a lot smaller on the screen! Please vote and share if you'd like to see this designed by LEGO* and on shelves! Thank you!

*The girders on the spine would be white in the real version, they're just very expensive to buy right now, but I don't think LEGO will have any problems with that!

So this is my first major project update, and really it's the command module at the front of the Eagle that's the focus - along with a little animation which you should hopefully see if you enlarge the new first image! When I finished building the Eagle physically for the first time I realised that, as I'd expected, using technic pins was fine up to a point but it couldn't detach all that smoothly. I also took a long hard look at the overall shape of the command module and decided it was just too... blocky?

So to an extent I started from scratch, and realised I could use brackets to attach the module to the main body of the ship whilst also creating a realistic seal around the "neck". This meant that the command module could now effectively form a life boat for the main ship, whilst giving access to the astronaut minifigure (they've also had an update to make them closer to the show's spacesuit). I smoothed out the nose of the command module and had a brainwave for the tip of the nose, resulting in an overall shape which I think is closer to the original's that I'm happier with.

As I looked at my Eagle at the Cromford model exhibition alongside the original studio model, I knew I needed to reconsider the pod doors. My son had already told me they needed to be bigger, which had left me scratching my head. Then I remembered that a passenger jet set of his had used a clever door opening method with angled arms, and that allowed me to design a door that hinged horizontally out and away from the pod whilst also letting me reproduce the look of the original door hatch.

The image below highlights all the little changes I've made to try and bring the model closer to the Eagle. Nothing impacts the playability of the set, and in fact the Eaglet shuttle is an attempt to demonstrate the enhanced playability of the concept due to the use of LEGO.  The spine is one area where I'm hoping LEGO might re-design it a touch, as although I've now got it fixed more firmly it's a little bulky at the end. I'll work on it. Finally for comparison, this is my Eagle up against the original studio model. Which is huge! I'll post some images of my final physical prototype once my last pieces order comes in. I hope you've found this interesting, it's been a real learning curve for me flicking back and forth between the digital and the physical and having seen the original up close for the first time.  One final change I should mention is not one you'd see, but the construction of the leg pods is now far better internally than in the original version - another example of the digital version being technically correct but a little fragile.  If you like the look of this, please do encourage others to vote for it - it's the only way it'll stand a chance of becoming a real set! Please let me know what you think in the comments, and I'll think about what other pods can be put together.  Thank you for reading, and stay safe. It was 45 years ago today, 4 September, that Space 1999 first aired! This project should still be going on the 46th anniversay, unless of course it's reached 10,000 votes by then! Thanks to all of you who have voted already, if you can spread the word that would be fantastic. I've nearly finished pulling together a physical prototype of the Eagle, because it wouldn't have felt right to have it digital only when there's been such tremendous support for it.  So I have, so to speak, put my money where my mouth is!

Building the model physically has resulted in some changes to the design which I'm going to highlight by actually bringing them into the main description of the project and the CG model, that'll take a little time for rendering and I need some more parts for the physical model but I'm not far off.  I'll also show you a little display I did of an earlier prototype at a place in the UK called Cromford Mills, where there were many examples of non LEGO Gerry Anderson models, including an original studio Eagle Transporter model that was so big I think my set would have fitted inside its pod! Let me know in the comments if you'd like to see that picture and keep an eye out for the changes to the project as a whole. Thank you!