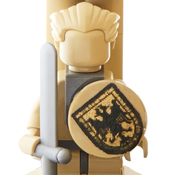 The Bremen Market Square is the historic centre and the most important attraction of the Hanseatic City of Bremen. The buildings from sandstone and brick on the four sides of the square are:
The Schütting (left): 16th century guild house of the merchants in Flemish style, now seat of the city's chamber of commerce (519 parts).
Four gable houses (2nd): Sparkasse bank building with a 1755 facade, Rathsapotheke building with council pharmacy, customs house and Deutsches Haus (from left to right, 918 parts).
The Bremen Town Hall (3rd): The most magnificent building on the market square from the beginning of the 15th century, with a unique Brick Gothic and Weser Renaissance style facade. Together with the statue of Roland in front it is listed as UNESCO World Heritage Site (578 parts).
The Bremen Roland: Statue signifying the town privileges of medieval Bremen, erected in 1404 (19 parts).
The Bremische Bürgerschaft (right): Parliament of the State of Bremen (432 parts).
The four units with 2.466 parts altogether form a complete diorama in miniscale, an eye-catcher of every LEGO architecture collection !
Please see also my stand-alone project Bremen Town Hall and Roland: https://ideas.lego.com/projects/675af8f7-2801-41d1-a705-2a4f661e1057