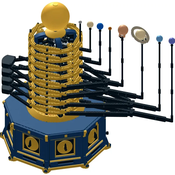 Clockwork Solar System
Mechanical models of the solar system, or orreries, have been around since the early 18th Century.
By combining our complementing talents over a period of 15 months, we have created a LEGO model that is both functionally accurate as well as being a beautiful work of art.
We both believe strongly that this model would be a great addition to the LEGO product line, and as such we have resubmitted this idea to be considered again.
From Jupiter's stripes to Saturn's majestic rings, each planet has been re-created to show its relative size and iconic features.
The relative orbits periods for each planet to complete an orbit is extremely accurate. A great deal of effort has been spent to make every planet's orbital timing to be over 99.8% accurate relative to the other planets.
Each planet's "year" is also represented through the 8 dials in the stylish octagonal base.
Also included within the base are a motor and battery box to fully motorize the model.
The model stands approximately 52 cm (20.5") tall, 44 cm (17.5") wide and 56 cm (22") long. Although 76 cm (30") is needed to allow for full rotation of outer planets.
At just under 3000 pieces, the Clockwork Solar System would be an exciting, informative and ultimately rewarding build for those who love Creator Expert or Technic themes, as well as lovers of astronomy, science and engineering.
We hope that you will help us make the Clockwork Solar System the next LEGO Ideas set.
About Us
Chris Orchard - I have been making Technic models since my early childhood. I love creating functional machines and mechanisms and have written a number of Technic articles for our LUG. Space has also been a great passion for me. This model combines my love of Technic and space into a model that has challenged and evolved my building skills.
Brent Waller - I've been on LEGO Ideas 10 years now, when it was first available as "CUUSOO" to a worldwide audience. I've got a lot of experience with Ideas as the fans designer of Ghostbusters and Seinfeld. I have an eye for aesthetics & design, and together we complemented each other's abilities perfectly to bring you this original and unique project that we hope you like!