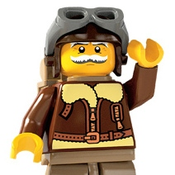 This is a very especial LEGO Technic project. As you probably discovered at any time along hours of playing, LEGO Technic, in contrast with other LEGO categories, is not a friendly brick construction system for airplanes or other aerodynamic shaped items. So it is not rare the lack of plane models in the commercial LEGO Technic sets. In fact, the implementation of such a model is a very big challenge.

The target of this project is to make an educational and semi-functional airplane model having the basic control surfaces of a standard airplane. Of course, the plane does not fly. The LEGO elements are too heavy and the motors are not powerful enough to reach a velocity suitable to take-off. However the fact of having the same control elements that you can find in standard airplanes is amazing and instructive.

In contrast with many LEGO designs, this set does not try to reproduce a specific real airplane. The concept here is to have a useful model for instructional purposes.

In order to help the handgrip handling, the controls are positioned outside the cockpit and are not at the same airplane scale. This may seem a little confusing but lets the user an easiest manipulation of controls that would be impossible otherwise.

For realistic purposes the helix is driven by a standard Power Functions motor fed by an AAA battery box (4x11x7) . The rotation speed of such a motor is usually too low to be realistic. So there is a gear system that increases the rotation speed. You can operate the little on/off switch in the battery pushing the flight instruments panel support in the cockpit. You can open the cockpit canopy to reach it.

Of course the security criteria in the project has been considered. The helix is made in a special design avoiding that the centrifugal force produces the loss of a blade. On the other hand, the gear system uses a friction gear avoiding any possible personal damages in the event of touching the rotating helix. This system protects the motor too.

The model has a damped undercarriage that retracts under the wings. The retracting mechanism is manually driven by a gear under the battery box. The system has been designed to support the airplane weight avoiding the flexing movements and minimizing the number of parts. In order to support the weight, high strength dampers must be used.

Due to the lack of non specular beams with bows (panels), some design licences have been taken. The rudder is made with symmetrical panels and the elevator is mono-block without horizontal stabilizer.

As in any airplane you can find three primary control surfaces: ailerons, elevator and rudder.

Ailerons control roll about the longitudinal axis. The ailerons are attached to the outboard trailing edge of each wing and move in the opposite direction from each other. In the model ailerons are connected by axels to a control stick. Moving the control stick to the right causes the right aileron to deflect upward and the left aileron to deflect downward. The increased lift on the left wing and the decreased lift on the right wing causes the airplane to roll in the longitudinal axe ascending the left wing and descending the right wing. Inversely, moving the control stick to left causes an inverse effect.

The up-elevator position decreases the camber of the elevator and creates a downward aerodynamic force, which is greater than the normal tail-down force that exists in straight-and- level flight. The overall effect causes the tail of the aircraft to move down and the nose to pitch up. The pitching moment occurs about the centre of gravity (CG). The strength of the pitching moment is determined by the distance between the CG and the horizontal tail surface, as well as by the aerodynamic effectiveness of the horizontal tail surface. Moving the control column forward has the opposite effect. In this case more lift on the horizontal stabilizer/elevator is created. This moves the tail upward and pitches the nose down. Again, the pitching moment occurs about the CG.

The rudder controls movement of the aircraft about its vertical axis. This motion is called yaw. Like the other primary control surfaces, the rudder is a movable surface hinged to a fixed surface, in this case to the vertical stabilizer, or fin. Moving the left or right rudder pedal controls the rudder.

When the rudder is deflected into the airflow, a horizontal force is exerted in the opposite direction. By pushing the left pedal, the rudder moves left. This alters the airflow around the vertical stabilizer/rudder, and creates a sideward lift that moves the tail to the right and yaws the nose of the airplane to the left. Rudder effectiveness increases with speed; therefore, large deflections at low speeds and small deflections at high speeds may be required to provide the desired reaction.

With the rudder, pedals also serve to control the directional wheel enabling airplane driving in earth.

In some airplanes you can find secondary control surfaces in order to add fly performance. So flaps and spoilers are implemented in this model too.

Flaps are the most common high-lift devices used on aircraft. These surfaces, which are attached to the trailing edge of the wing, increase both lift and induced drag. Flaps allow a compromise between high cruising speed and low landing speed, because they may be extended when needed, and retracted into the wing’s structure when not needed. A three flap position system (cruise, approach and take-off/landing) has been implemented in the model. An only lever with an interlocking system controls the left and right flaps set simultaneously

Found on many gliders and some aircraft, high drag devices called spoilers are deployed from the wings to spoil the smooth airflow, reducing lift and increasing drag. Spoilers are rare in small planes like ours, but the system has been implemented for educational purposes. On gliders, spoilers are most often used to control the rate of descent for accurate landings. Deploying spoilers allows the aircraft to descend without gaining speed. Spoilers are also deployed to help reduce ground roll after landing. By destroying lift, they transfer weight to the wheels, improving braking effectiveness.