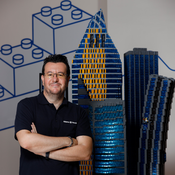 By Ceyhun Eren
146 comments
Ready to discover the mystery by using a replica of the cryptex invented by Leonardo Da Vinci?
Let me take you on a trip back to the late 1400’s…
The cryptex is a portable secure box, which contains hidden messages inside and can only be opened by the secret code defined with its special mechanism. The word, Cryptex comes from the combination of the two words namely ‘’Cryptology’’, which means ‘’hidden or secret’’ and ‘’Codex’’, which means ‘’an ancient book made of stacked, hand-written pages’’. This device was originally created by Leonardo Da Vinci to protect important information and to hide secret messages.
I thought that it would be great idea if we can design a similar toy made of Lego especially to show how we can break the boundaries by Lego and also to give an opportunity for our children to improve the ability for solving puzzles by playing this ancient device!..
Features:
I have tried to capture almost all critical features of the original cryptex into the model.
Similar to the original cryptex, it is stored in a special box, which holds the cryptex safely inside.
The Lego Cryptex works in a very similar way with the original one invented by Leonardo Da Vinci, like a bicycle’s combination lock. One of the most difficult parts in this model was to create Lego disks, which can be rotated independently of the others to create different letter-alignment combinations. In addition, there are some spaces to create the holes for letting sliding of the obstacle bars. If you align the separate Lego disks with the correct position (on the line defined by pearl gold colored bricks) according to the letters on the disks by rotating each of them around the outer cylinder core, the inner cylinder tube slides away from the device and you can reach the hidden message. This is a secret map in this case, which is visible after you pour some water on it (Thanks to creative Lego Friends Set!) in the Lego barrel on the far end of the inner cylinder tube.
If you don’t make the correct combination, it will not be possible to slide the inner cylinder away from the device since the small bars on the inner cylinder will prevent the sliding as being the obstacles in between.
The original password to unlock the Lego Cryptex is the answer of the question ‘’What do you feel when you hear the word, Lego?’’
You can also visit the following address to watch the video which shows the working principles of the Lego Cryptex!..
I hope you would also enjoy as much as I do while solving the mystery behind the Lego Cryptex :-)
Many thanks for your supports in advance!..
Dimensions:
Box;
Length: 21 cm
Width: 12 cm
Height: 13 cm
Cryptex;
Length: 19 cm
Diameter: 7.5 cm