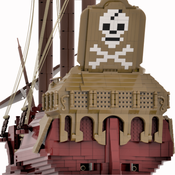 By Ropnoj
179 comments
The woolly mammoth is an extinct creature similar to an elephant and with a ton of hair. This build attempts to show the shear awesomeness of the mammoth in it's prime.
I call this mammoth, Fluffy.
Fluffy is a big build and was very challenging. I started to design Fluffy as a small character than slowly it evolved to the large scale beast you see in the pictures. Fluffy is of epic proportions and hides a secret. Fluffy's hair, or hide, is actually built on top of a skeletal structure. I first started with the skeleton as a frame, a very large frame, to mimic the immense size of the mammoth. Once the skeleton was complete I decided to give it a hide. This is where my journey with Fluffy became very difficult. Maneuvering pieces around a skeleton is very hard to find the right look, but I believe Fluffy is complete. Not to say that Fluffy is without flaws but still I see Fluffy as ready to be reborn into our world.
This build is unique in that there is a skeletal frame underneath all of the hide. I have not seen an animal build before that has started with a skeleton and then continues the build further outward and on top of that skeleton. It is similar to a vehicle in that technic pieces are used as a frame and then the fairings and such are attached outward and on top. So in that regard this build is like a vehicle but it is instead an animal. I think it is really cool to have started with the skeleton and I also think that the look of the build was influenced because of this. The skeleton gave the hide its personal look and to me added a lot of realism.
I built Fluffy with the intension of having the hide on top of the skeleton but it would be cool to display it as either the hide version or the skeleton version. These versions I refer to as:
Full of Fluff - which is the hide version (my favorite).
Or
Peace and Rest - which looks like a museum exhibit and is only the bones of the skeleton.
It's your choice and you can change back and forth as you desire. There are side by side pictures to see how the skeleton fits into the hide.
I hope you enjoy Fluffy as I do.
Fluffy's final specifications are a whopping:
60x24 studs
1885 pieces (skeletal frame is approximately 500 pieces)
Also if you are interested, there is current research on-going that aims to bring back the mammoth in a sustainable way that could positively impact environments. I'm not kidding, scientists are actually currently trying to bring back mammoths. Perhaps Fluffy will usher in a real life rebirth of the mammoth. What an interesting time in our lives that this is possible. Leave it to humanity to create beautiful art, construct amazing feats of engineering, and possibly give life to an extinct species!