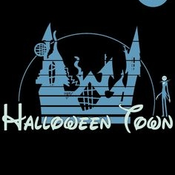 Here's a  2 900 pieces project from The Nighmare Before Christmass. It's Jack's Skelligton house!

I've tried to build the house like the movie one, but with little changes because of the impossible physics of the original one, so there's a grave under the house. A part of the rock wall with the doors is here, but there was nos screeming cats in the LEGO pieces available, so there are rats in top of the tiny towers of the wall. The first floor of the house is too small to put something inside. But the second floor is bigger and is used as the higher tower in the movie (the actions in the movie happen in the towers, so if I'd build the house to make the tower usefull as the movie, the house would have been too big).

In the house, there's a Christmass three, science stuffs and experiment, a teddy bear (like in the movie for the experiment) and a "Sanddy" Clause costume. I'm now worcking on improving the inside of the building, so it would be awsome to play.

I'm worcking on macking Zero alive in LEGO. It would probably be a collective character because of its pecular shape.

Thank you for your help and don't forget to follow and to leave a comment, let me know what you think!