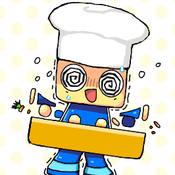 The Servbots, also known as Kobun (コブン) in Japan, are 41 small support robots that were created by a 14 year old air pirate named Tron Bonne to support herself in order to perform her tasks and missions.

They were portrayed as anti-heroes in their first debut in the low poly video game ”Mega Man Legends” which was released on December 18th of 1997 in JP, and later released in August 31st and December 4th of 1998 in other countries and later becoming stars of their own spinoff game “The Misadventures of Tron Bonne” in 1999.

Being one of former Mega Man producer Inafune Keiji’s favorite Mega Man title, The Legends series were quite unique at its time. While they may not be the greatest the series offers a good and fun level of exploration for the player, missions and gameplay that is different than most traditional Mega Man games. With creative use of pixel art for the textures, animations, cutscenes, unique gameplay mechanics and recurring characters the series were well-received by the community and was rewarded as PlayStation’s Best for Family games. And in addition Tron, The Servbots, Volnutt, and Roll made several cameos in other games such as Marvel vs. Capcom 2 & 3, Namco x Capcom, Tatsunoko vs. Capcom, Lost Planet, Dead Rising, Project X Zone, Street Fighter V and many more.

That being said, these connections, development notes, records, relations and how much the people adore and enjoy Lego and Mega Man along with its massive fanbase for the Legends series still rolling is what motivated and inspired me to create a Lego Ideas set out of the Servbots, and bring the world of Mega Man and tribute the Legends series to the newer audience, fans, gamers and builders in Lego form!

The Servbot alone has 1504 pieces, Head can rotate side to side, it uses hinge pieces to connect the legs, the forearms can rotate as well, the claws can be hinged to a few angles and the arms can be reattached and slightly customized to be posed vertically or horizontally. Extra pieces for the arms are included for the arrangements

The journey and experience I learned in the making of this project was so much fun and I’ve been very passionate with Lego and Mega Man, I enjoyed the time I've spent on designing and illustrating all these things together. When I finally got the chance to play the Mega Man Legends games after designing this it didn’t failed to impress me, I really enjoyed playing them along the franchise as a whole, and I believe people should know more about it too, right now some people are getting some attention to the franchise but I still believe it still deserves some more recognition. I consider honest that all this could be a nice and fun collector’s set for those who love Mega Man because it features a big Lego Servbot and the classic Mega Man gear to build for your collection or even build with friends and families, with a handful of details, add-ons and Minifigures that could also bring some attention to old and new Mega Man and Lego fans.
Thank you to those who are looking and reading my project here and it would mean so much more if you could help and support this project reaches 10,000 votes and potentially become an actual LEGO set in the future.

Also huge thanks to my family, my friends, my teachers, and so many people for giving me feedbacks, helping and encouraging me to move forward and get back up.