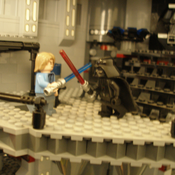 My idea for the set is a small set that comes with two Manta subfighters, four Aqua droids and maybe a background piece. Each Manta subfighter would feature a printed "head" and two of the new spring loaded shooters. I think that the set would be around 15$ (it is a battle pack sized set).

The ship is solid and fairly simple. It takes inspiration from the 2014 Vulture Droid set, but is much smaller. This set would be a nice contrast to the numerous Vulture Droid sets, Tri-fighter Droid sets and battle packs that Lego has produced.