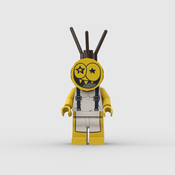 By Tom_Brick
225 comments
LEGO Space sets have always enjoyed a tremendous success with the public as evidenced by recent sets such as the International Space Station, the Apollo rocket or the Space Shuttle. Yet, one of the most important puzzle pieces in the modern day space economy is still missing from the world of LEGO.
Meet the Soyuz spaceship, the work-horse of international space travel. It is long overdue that this safe and reliable spacecraft is celebrated by giving it its own LEGO set. In service since 1966, this space craft has proven to be the most successful to date and has received many updates over the years. This set is based on its latest iteration, the Soyuz MS.
Like the real ship, this LEGO set consists of three modules that can easily be detached from one another. On the Decent- and Orbital Module, the side panels can also be removed with little effort. Everything is connected via clips and/or ball-joints.
So let's have a look at our three modules in a bit more detail:
Instrumentation Module This module contains systems for temperature control, electric power supply, long-range radio communications, radio telemetry, and instruments for orientation and control as well as the propulsion compartment with the main engine and a liquid-fuelled propulsion system for manoeuvring in orbit and initiating the descent back to Earth. It has a system of low-thrust engines for orientation, attached to the intermediate compartment. Outside the Service Module are the sensors for the orientation system and the solar array, which is oriented towards the Sun by rotating the ship.
Descent Module The Descent Module is used for launch and the journey back to Earth. Half of the descent module is covered by a heat-resistant covering to protect it during reentry; this half faces forward during reentry. It is slowed initially by the atmosphere, then by a braking parachute, followed by the main parachute which slows the craft for landing. The parachutes are stored inside the module behind the three cosmonauts who are tightly crammed in between them. In here are also the instruments / controls needed to pilot the craft.
Orbital Module The forepart of the spacecraft is the orbital module, also known as habitation section. It houses all the equipment that will not be needed for reentry, such as experiments, cameras or cargo. The module also contains a toilet, docking avionics and communications gear. Internal volume is 6 m3 (210 cu ft), living space 5 m3 (180 cu ft). On later versions, a small window was introduced, providing the crew with a forward view.
Please support this set!
You can help make this set a reality by supporting it and by sharing it with your family & friends, on social media and in real life. Thank you very much in advance.