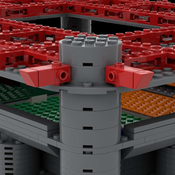 By ProfessorCheekyBacon
24 comments
Unforgettable football matches, champions league finals, football world cup semi-final, historical concerts (Rolling Stones, Bob Marley, Bob Dylan, Bruce Springsteen…): this is San Siro Stadium!
San Siro Stadium is located in the north west of Milan. The district in which it is located has been named "San Siro" and this is the reason of staduim's name.
It is the biggest stadium in Italy with 80018 seats!
Entirely designed and built by my friend Danilo Castelli (User KapauFocosa022)  and me, it is an amazing reproduction of San Siro Stadium, where football teams A.C. Milan and F.C. Internazionale play home matches.
Our idea was born when we realized that the fans of the football teams of Milan need to have a distinctive symbol at their home, which makes them real supporters.
This request officially came from a very passionate Milan supporter, but as soon as others football team's supporter heard about this idea they asked us for information and gave us advice on how to improve it.
After a few months we had already completed a first smaller version (about 10x12cm) but we were not fully satisfied. So we decided to rebuild it on a larger scale and adding more and more details.
The most difficult parts to design were definitely the roof (especially the red part) and the choice of the right piece for the colored stands.
We have mixed our football and LEGO passion and achieved this amazing result! They permitted us to create a unique project, which will allow to fans and supporters to have a piece of football history in their own home.
Details:
It took about 1 year and an half, using 1338 original lego pieces.
Lenght 32cm
Width 26cm
Height 10,5cm
I have the explicit permission by KapauFocosa022 to publish this project.