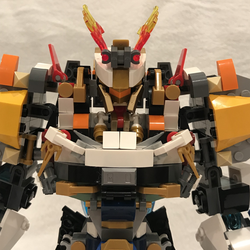 DRAGONSLAYERX
17
This is my own creation called the Omega Mech Ultra I had made another type of Mech called the omega Mech I had soon taking it apart and created a much better version of it
I believe this would be a great Lego set because it works and functions like a great build in which Lego would create. The legs in arms can move like a robot from the show pacific rim.
My build includes accessories like in to obsidian swords and who Plasma blades my build also includes one sticker that has the number 34 on it . This build also includes a stand for you or anyone else who gets the site if it becomes one for it to stand onto it and be on display.
When I had made this build I have been thinking of the movie Pacific rim uprising because it is one of my favorite shows. I have always enjoyed watching the robots battle the monsters I made my build fully operational for many children and adults to play with it I would recommend for my build do you have an age limit of 12+
I had used my knowledge of human anatomy in order to make the legs move properly like a robot from pacific rimYou can also move the legs and arms at a 90° angle.
I am very proud of this build and I hope it becomes a great Lego set one day.
17