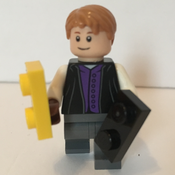 Hello, this is my Lego Foosball Table. This was my custom design and I put a lot of work into it so please support. This model would have been posted a lot sooner if a had not had a shortage of parts. I was very short on the tiles on the deck of the table and the cores of the figures. I ended up having to send various orders on eBay. So, it was pretty cool when all the parts arrived and I got to see how it all came together.
Minifigures- The figures are interchangeable. You can just switch heads to change the theme of your character since all of the characters are the same. The figures themselves are mounted on one by one bricks with four side connector studs. This allowed the maximum amount of detail with the smallest design possible. If you are wondering why I didn't just mount normal minifigures, I'll tell you. I thought that the design would be more custom and less of just a table and mounting system. So, I complicated it and made my own figures. Using the one by one brick, I put a Technic clip piece on either side of the figure. These looked like hands when I was done and was very useful for getting the ball out of the corners. I placed a one by one wedge on the front so that when the figures hit the ball when it was directly under them it would slide out instead of breaking the figure. I kept with three minifigures per shaft, this could be modified later on if i felt it necessary, but I thought it worked good enough how it is. It is super easy to modify the shafts and put them back in, so if you want to take out a few figures to make it easier you can. The overall look in the end satisfied me and it worked very well with the model.
Ball Stuckage- I also made the model to where the ball cannot get stuck directly between the figures. In a normal foosball table, if you place the ball in the dead center between the two opposing figures, then neither figure can hit the ball. In my model, there is no dead center, so don't worry about getting the ball stuck. With the help of the figures' hands it is fairly easy to work the ball out of the corner, so there weren't a whole ton of places that the ball can get stuck. One place I found that the ball could get stuck is right before the goal. If you hit the ball too lightly towards the goal the ball will slow to a stop and get stuck in between the tiles. When the ball is there it is impossible for the figure to touch the ball. Overall, it is very hard to get the ball stuck anywhere so I am happy with that.
Frame, the frame of my model turned out to be pretty big. I decided that it would be optimal for there to be as much space for the ball to roll around in and to travel across to the goal. You don't want your games to go by too fast now do you. The final size that I ended up using was 20 by 45 Lego studs. Normally if you make your foosball table bigger then you have more spaces for the ball to get stuck in. But, because of my minifigure design, I didn't find that to be much of an issue.
Goal, I connected the goal to the base of my model for extra support. I also elevated the one by eight tile on the end to be one plate higher than the tiles on the bottom of the foosball court. This made it virtually impossible to hit the ball out of the goal. As you can see in my video above, I hit the ball into the goal practically as hard as you can hit it. And, it didn't fall out. The goal was very sturdy and can hold up to two balls. Overall the goal did its job and looked good when I was done.
Scorekeeper, the Lego scorekeeper uses a one by one tooth to hold a one by eight panel in place. The panel slides around and the tooth is used to cover the notch that you are at. I didn't have stickers so I used the seven notches on the back on the one by eight tile. With this version, the first person to seven wins. I figured that that was a decent amount of points for a two player game. (possibly more)
End note, I hope you liked my model, please let me know your thoughts in the comments, and please support!