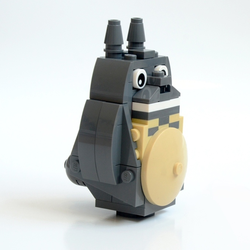 Howl's Moving Castle (ハウルの動く城 Hauru no Ugoku Shiro) is a beautiful fantasy film, animated in the traditional "2D" style that has separated its creator, Studio Ghibli (株式会社スタジオジブリ Kabushiki-gaisha Sutajio Jiburi), from other animation studios of today.  Based on the novel by the late British writer Diana Wynne Jones, and directed by the famed director Hayao Miyazaki, the film follows two central characters, Howl and Sophie, as their lives become intertwined with magic, romance, and a little bit of fate.

Perched at the center of the film, and providing its namesake, is the incredible mobile castle built by Howl--the mysterious wizard with a fiery heart.  This imaginative "castle"--more like an amalgam of old machinery parts precariously held together by the resident fire demon, Calcifer, wanders the Alpine landscape of the Wastes with its quirky inhabitants, hiding from royal officials looking to harness Howl's enormous powers.  The castle creaks and clatters as it lumbers, drifting into and out of misty lands of demons and spirits, and spells.

This display model rises to over 12" tall, and features all the fine details you'd expect from a scale model of this vivacious mechanized castle.  Its "mouth" opens, raising smokestacks in the back.  Wings flap, propellers turn, levers toggle, and of course its feet can be adjusted and posed.  You'll spend hours pouring over the fine detailing that has gone into the model, and it will be a prized addition to your LEGO display.

Finally, to sweeten the deal, I've included a custom-designed Howl minifigure and the fire demon Calcifer, to help you act out your favorite scenes from the film.