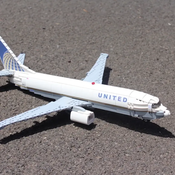 By WijjiamBricks
87 comments
Tower: N0937 cleared for takeoff Runway 4 Right.
N0937: Copy, cleared for takeoff 4 Right.
This is my Lego Boeing 737-800 in the United Gold livery. Built at 1/80 scale with an estimated 1400 parts, this incredible airliner has a wingspan of 48 studs, length of 55 studs, and a height of 17 studs.
The Plane
The Boeing 737 Next Generation, commonly abbreviated as 737NG, or 737 Next Gen, is a narrow-body aircraft powered by two jet engines and produced by Boeing Commercial Airplanes. Launched in 1993 as the third generation derivative of the Boeing 737, it has been produced since 1997 and is an upgrade of the 737 Classic (−300/-400/-500) series.
It features a redesigned wing with a larger area, a wider wingspan, greater fuel capacity, and higher maximum takeoff weight (MTOW). It is equipped with CFM International CFM56-7 series engines and a glass cockpit and features upgraded and redesigned interior configurations. It has a longer range and larger variants than its predecessor. The series includes four models, the −600/-700/-800/-900, with seating between 108 and 215 passengers.
The Model
Based on the second longest variant of the Boeing 737, this MOC was meticulously sculpted down to the last detail. Featuring functioning landing gear, my 737-800 can fully support itself with its own six wheels, as well as leave enough ground clearance for the iconic 737 flat engines. To further maintain accuracy, I created custom decals for the United Airlines logos, as well as the registration number, N0937 (flip the numbers upside down for a fun easter egg), and the tiny American flags. For transportation purposes, the entire plane can be broken down into six pieces (nose, mid section, two outer wings, tail, vertical stabilizer). Also included is a miniature pushback tug, ready to assist the aircraft in leaving the terminal.
Please give your support if you like this idea and don't forget to tell your friends and family about this Lego Boeing 737-800.
You can view a full showcase on my blog: William's LEGO MOCs and Reviews