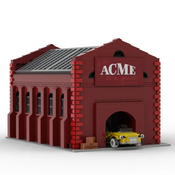 Who Framed Roger Rabbit:
"Now Roger is his name, laughter is his game. Come on you dope, untie his rope and watch him go insane!" - Eddie Valiant
Who Framed Roger Rabbit is a 1988 American film produced by Touchstone Pictures in collaboration with Steven Spielberg and Robert Zemeckis. The film is about a world where cartoon characters, called Toons in the film, and humans live in the same world. Taking place in 1947, the movie stars a down-and-out detective Eddie Valiant, played by Bob Hoskins, who does not like toons due to a traumatic event. But when he is offered a high paying offer for an investigation for Maroon Studio's biggest star, Roger Rabbit, he accepts. The investigation eventually leads to the death of Marvin Acme, the owner of Toontown, and Roger ultimately gets the blame. But when Eddie puts the pieces together, not only does he realize Roger is innocent, but there is far more happening than what it seems. He teams up with Roger and his friends, while dealing with the Toon Patrol, who want to capture Roger, and see if the mystery can be solved.
The film went on to have a legendary legacy, winning multiple awards, being present in multiple Disney parks, and has even been registered as an important film by the National Film Registry. The film is still praised to this day due to its humor, characters, and most notably the animation. This film has done something that films nowadays can't do. Who Framed Roger Rabbit managed to have many iconic cartoon characters from different companies together in the same screen, such as Mickey Mouse, Bugs Bunny, Betty Boop and Woody Woodpecker just to name a few. Although younger people may have not seen the movie, they know who Roger Rabbit is, showing the legacy this movie has to this day.
The ACME Factory:
"If it's Acme, it's a gasser." - Marvin Acme
The ACME factory is a major location of the film and is where the death happened. The factory is filled with all the gags and objects that are in cartoons Maroon Studios creates. This includes giant magnets, bombs, portable holes, boxes full of stuff, talking shoes and singing swords. This factory has everything anyone could ever think of being in a cartoon! The ACME factory also serves as a gateway into Toontown, with many toons coming to Maroon Studios through there.
From this point onward, there will be SPOILERS for the movie. I highly recommend watching the film in case you don't want the movie spoiled. The ACME Factory also serves as the location of the finale of the film, revealing Judge Doom is both the villain and is the one responsible for Marvin Acme's death. He then reveals his plan to destroy Toontown and replace it with a freeway. He plans to do this with a massive vehicle filled with his creation called Dip, which can permanently erase a Toon. With Roger and Jessica Rabbit caught, it's up to Eddie Valiant to stop Judge Doom and the Toon Patrol from achieving their plan, using everything he can in the ACME Factory.
The Idea:
"These people need to laugh" - Roger Rabbit
I just love creating iconic cartoon moments and characters in LEGO form, as seen from my first ever idea, Tom and Jerry: The Golden Era. I also love creating buildings and have a thing for architecture, so why not combine the two? That's what ultimately lead to me to make this idea. Containing exactly 2014 pieces, I created the ACME Factory at a good scale to make it work with minifigures and not make it too big for LEGO Ideas. Because of the size, I made this set easily accessible, with both the roof and a side of the wall can fold open. The back can also be removed, this is due to it being where Toontown would be during the scene. Just like my first submission, this set contains many Easter eggs from the film hidden throughout the set, try to find them all.
The Minifigures:
"I'm not bad. I'm just drawn that way." - Jessica Rabbit
Along with the ACME factory, there are five minifigures. These minifigures have been chosen due to the relevancy of this scene. They are:
Obviously, I couldn't add any of the iconic cartoon characters from all the different companies at the end of the film. However, I did my best to choose the characters that would make the most sense to have if a Roger Rabbit LEGO set were to ever release. Stud.io, what I use to make this idea, is limited on pieces, so I had to improvise the heads of Roger and Smarty. However, if this idea was ever chosen, LEGO would likely make new head pieces for the two.
The Vehicles:
"No. I'll drive, I'm the cab" - Benny
This set includes three vehicles.
I made these vehicles in minifigure scale so that they can all fit within the ACME Factory. The steamroller can fit one minifigure, while both Benny and the Dip mobile can fit two.
Conclusion:
I hope I managed to gain people's attention to not only this set, but to the movie. Shockingly, there hasn't been a lot of idea submissions based on Who Framed Roger Rabbit or any even close to the scale of this idea. Whether you like the architecture of the set, a fan of the movie or of Disney in general, I hope there is something to like in this idea.