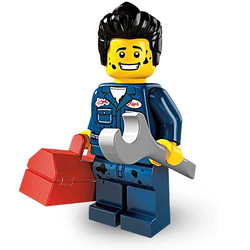 My very first MOC: very happy with the result, hope this got your interest too.

This four-stroke high-performance engine is equipped with 5 valves per cylinder. The compressor helps the engine ramp the revs, while the reinforcements keep the engine together at its maximum performance. To avoid the compressor releasing to much heat, it is covered with a heat-resistant shield. Open the lid to see the full detail of the in- and outlet. The transparent parts even allow you to take a look at the inside.

The adjustable angle of the exhaust valves makes the engine run smoother at high speeds. As the valve angle can be locked this high-speed configuration can also be used at idle speed. The camshaft cover allows you to take a look at the valves and camshafts.

The starter, water pump and alternator have a full open design, showing all the engine components running and turning, including the internal parts. The hoses and electrical wiring color settings help identify the actual function. Blue for cooling, green and red for electricity and black for exhaust.

Due to the valve and overhead cam design (as a real engine) this engine only works (counter)clockwise. Even with the valves adjusted to minimal resistance the engine can only run one way round. To avoid internal damage a clutch gear is used to withstand the friction in case the engine turns the wrong way round.

As the engine is under tension due to the springs used for the valve angle, multiple strengthening brackets are used. This keeps the engine firmly together. In fact: all surrounding components have been firmly attached to the main engine block, which makes the design less fragile.