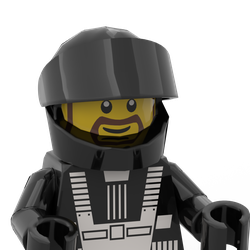 After running into a classic space friend at an off world monster truck rally another 1970’s minfigure contacted me through my Lego Idea page.

He told me, Jeffy-O, I have been flying around in my old school spaceships for a long time, and don’t get me wrong, they are amazing, but I see all these young minifigures in their tricked out vehicles and I wonder…what are all those parts they use?  Bricks with studs on the side?  Friction Hinges?  Skates! We never had those when my ships were designed……

After hearing his plea for an updated vehicle I immediately set to work and the Neo Classic Space Defender (designation NCS-D1) was born.

The NCS-D1 features the classic space blue and grey colour scheme (accentuated with the requisite bumblebee pattern) and is the updated Starship all Lego Spacemen and Spacewomen need to fly around the galaxy in style.

The next time you see a blue and grey blur fly past your planet and hear that swoosh, you'll know...the NCS-D1 was there!