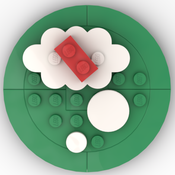 “Lego House” is a successful song by the English singer-songwriter Ed Sheeran, from the album “+”. You can also find the video clip’s Lego version online.

Ed Sheeran is not only an amazing musician, but he is one of us! He is a big Lego fan. “When my album went to number one I bought the death star Lego kit, it was time…” he said. He has treated himself by buying Lego, now we have the chance to celebrate his success by building an Ed Sheeran BrickHeadz. We can put an AFOL into a Lego set!

This BrickHeadz set counts 266 bricks. It includes Ed Sheeran with his signature guitar, microphone, speakers, and, of course, a Lego house. Ed is wearing a green hoody, similar to what he wore in the video clip and the small Lego house came from the clip as well.

Thank you for visiting!

If you like my idea, check out my other project River Cruise: