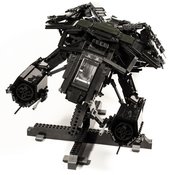 Hi.
This is our final version of ”The Bat” We have bean working on it off and on for 3 months. We have started over 3 times. The hardest part i think was to get the proportions right. The pictures we worked from was all in different lighting and perspective and some the toy versions of it really sucks. I think that we have gone trough the movie at least 50 times, good that it`s a super cool movie!
We started out with a set of the Tumbler (76023) for Bricks. We have a lot of sorted Legos in our work shop but it didn’t take lang before we started ordering parts from Lego.
This project started just for fun and the fact that i wanted ”the Bat" in my Lego Batman collection, and when we was building the Tumbler we thought that it would be possible to make ”the Bat” from the same bricks.
We don’t know the exact amount of bricks, but from building a lot of sets it looks as 1500 - 2000 bricks. The size is almost as big as the Tumbler. the first versions was smaller but as we started building motors and cockpit we realized that we needed to go bigger. The stand for it is as high as we think its possible to get it, the first one we did was lower and then it was hard to se the very nice and complicated flaps and propellers under it!
There is no propellers in the jetengines, we couldn't find any that fit. so if someone knows about the perfect one place tell us.
Info from Wikipedia:
An entirely new version of the Batwing appears in the film The Dark Knight Rises, referred to simply as the Bat. It is an unconventional, lightweight volantor-like craft with a ventrally mounted rotor. Developed by Lucius Fox, the Bat was originally intended for close-quarters urban military operations but instead becomes Batman's new primary vehicle. Fox notes that the Bat's autopilot function does not work but suggests that Bruce might be capable of fixing it. The vehicle is armed with machine guns, cannons and a variation of the EMP device he used chasing Bane's men. Batman first uses the Bat to escape pursuing police officers after being cornered in a dark alley. Immediately after, he uses it to rescue Selina Kyle from Bane's henchmen. Later in the film's climax, Batman uses the Bat in the fight to retake Gotham City from Bane and he uses the Bat to haul a fusion bomb away from Gotham City where it detonates over the ocean and presumably kills him. Later, while completing work on the Bat, Fox discovers that Wayne had fixed the autopilot function months before and may have escaped before the bomb detonated. In designing the Bat, Nathan Crowley approached it as if it were an actual military project, emphasising the need for it to "fit into the same family" as the Tumbler and the Batpod.

The final version of the Bat takes its design cues from the Harrier Jump Jet, Bell Boeing V-22 Osprey and the Boeing AH-64 Apache.[11] Chris Corbould described the Bat's size and shape as presenting a major challenge for filming given Christopher Nolan's emphasis on practical effects over computer-generated imagery. In order to make the Bat "fly", it was variously supported by wires, suspended from cranes and helicopters, and mounted on a purpose-built vehicle with hydraulic controls to simulate movement.