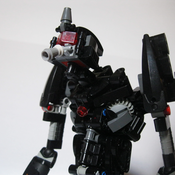 I can't believe it. Over 9000 people have supported this project, and the number keeps climbing it. This is it. This is happening. We can make it to the review stage. I cannot express in words how happy this makes me.

Thank you, all of you. Those of you who have supported this project, whether you've been there since it was fresh and rough or you just came by to help with the final push. This wouldn't be possible without people like you. I am truly grateful.

I didn't get any kind of special image done like I usually do, I apologize. However, I am still just as passionate for this project as ever, and I thank you all for giving it your passion as well. With as much time as we have, I think there is no question we can do it!

Again, thank you all for your continuing support. I appreciate it. 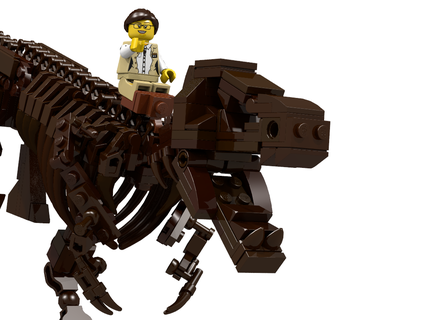 The days counter on the sidebar says "365 days left", which, as best as I can tell, means it's been almost a year since I made this project, and definitely means it's got another year to get the remaining support it needs. This is an intriguing milestone! Considering in this last year, the project has already achieved over half the support it needs, I believe it can achieve the 10,000 it needs! In celebration, I designed this meticulously detailed (but not minifigure-scale) T. rex skeleton in LDD. 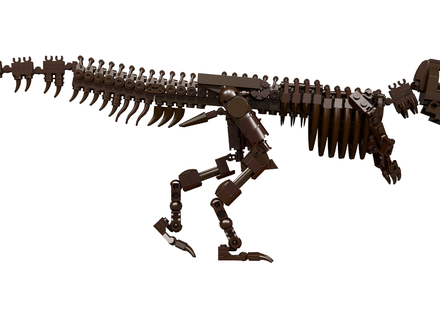 Note that this T. rex is not part of the proposed set, and I currently have no plans to make a project for it (for starters, it's somewhat impractical in real life). I don't foresee any other updates to the design itself. Not that I believe it's perfect; I just think any updates would change the identity of the set to the extent that I may as well overhaul the project. At this point, that would be dishonest to those who supported the earlier versions.

Thank you all again for your support. Please continue to support this project. I believe we can hit 10,000 before time runs out! 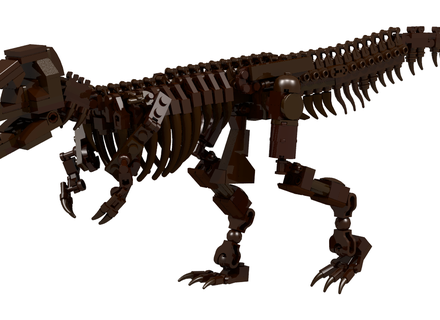 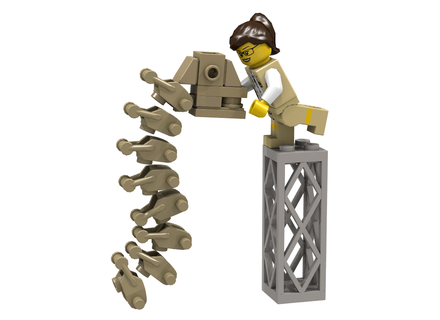 Thank you all for your continuing support! As long as people continue supporting at a rate of ~9 per day, support should be in our grasps! 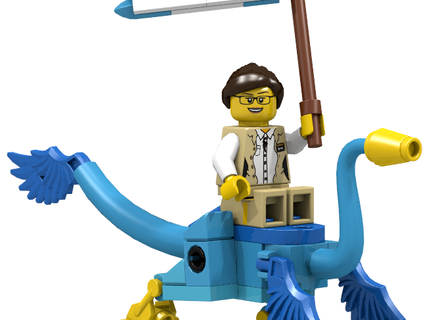 A palaeontologist gallops into view on the back of a majestic Gallimimus to deliver a very important message.

Thank you all for your support! With your help, the Fossil Museum has gotten halfway to full support! No time for complacency, though; there's still the other half to go. Here's hoping the support keeps on coming!

(P.S. The Gallimimus isn't a part of the proposed set; I just figured our palaeontologist friend deserved something a bit more substantial than old bones this time.)

First of all, thank you, everyone, for your continuing support! The rate of support has decreased significantly, but I have hope for this project.

I decided it was time to revisit the base of this project, the exhibit itself. The current version feels too closed-off, and a little visually dull. So, to combat this, I opened it up to a curved space, with a rocky ornamental border to it. 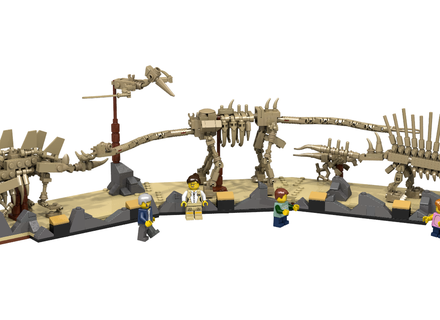 While I was at it, I redesigned the pterosaur. Now, it represents an azhdarchid pterosaur, like Quetzalcoatlus. Unfortunately, I cannot get it to scale with the actual azhdarchids, who were, when standing, as big as giraffes at their largest. They were truly the most impressive of the pterosaurs.

Again, thank you for your support, and let me know what you think of the redesign in the comments! 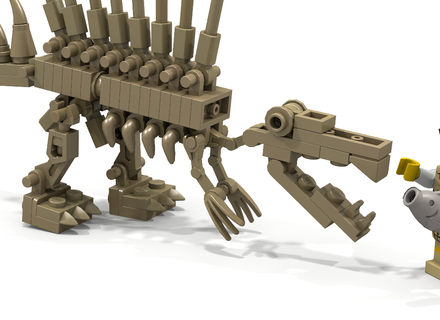 So I finally took it upon myself to study up on the recent paper on Spinosaurus and its proportions that has revolutionized what we know of this animal. Since the point of this project is to be educational, I decided it was for the best to get this up to date with what we now know. 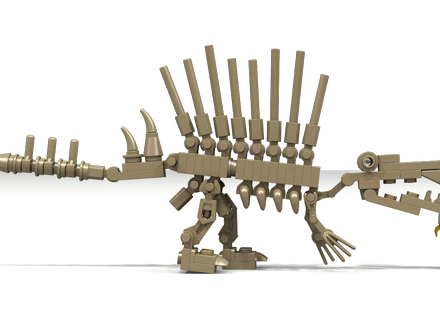 First things first: I will be the first to say this looks weird, and this is even with me going by Scott Hartman's proposed correction to a possible scaling issue instead of the paper's proposed proportions. Spinosaurus had really short legs for a theropod. What is important to remember is that sometimes, nature looks weird, and there's not really a lot we can do about that in the end besides accepting it and moving on.

And so science marches on again. Every day we discover things that revolutionize the way we think. Who knows what else lies in wait? 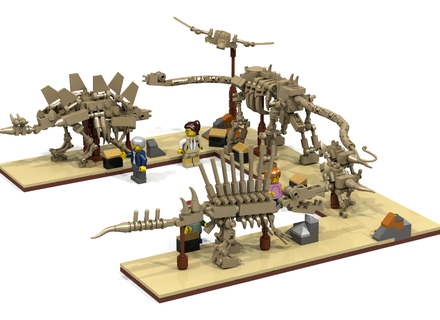 Thanks again for all your support!

Thank you all so much for supporting my project! Unfortunately, I don't have any changes for this update, so instead here's a sick picture of the paleontologist riding the Apatosaurus skeleton. 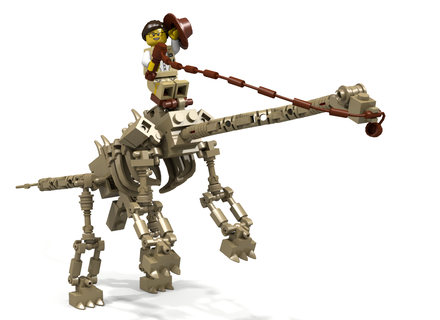 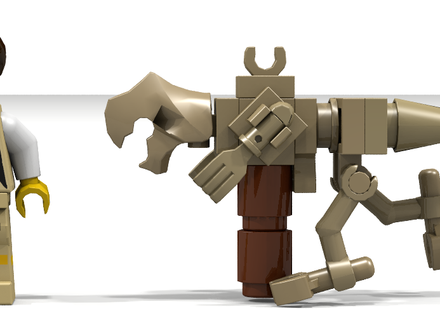 Thank you all for the 2000 supporters! I never anticipated this project getting this much attention so quickly. Thank you for your interest in my work.

At someone's suggestion, I have fiddled with the Deinonychus skeleton, with hopes of making it more Deinonychus-shaped. The crab claw piece is the single best piece I could find for a skull at this scale, so I hope you can appreciate the new shapeliness of the profile. The catch is that this is less to-scale than the previous design, being slightly taller, but at this size I am more willing to be flexible with scale to a minifig. I will gladly take comments and criticism on this design before making any changes to the project itself. Tell me ways it can be improved, or if you think I should just stick to the old one.

Again, thank you so much for your support.

EDIT: A couple other changes; I lengthened the arms, and tried using a foot piece that at least gives the profile of the "terrible claw" 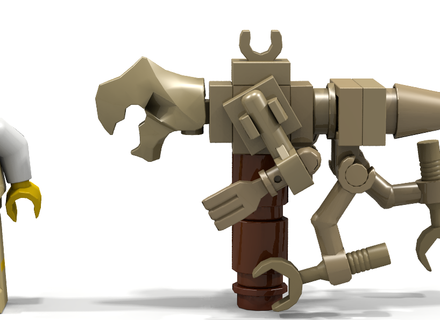 Again, please tell me what you think!

First of all, thank you all for your support! We hit 1000 supporters in a single week! It doesn't take a mathematician to calculate that means, if people continue to support at the same rate, we will achieve 10000 supporters in a mere nine more weeks. Thank you for your interest and your kind words.

I didn't want 1000 supporters to go uncelebrated, so I whipped up a little surprise: a rough draft of what I'd like to see for body printing for the paleontologist minifigure. As you may have noticed, the current figure is simply wearing the Zookeeper's outfit, which makes a good stand-in, but wouldn't do for a final set. 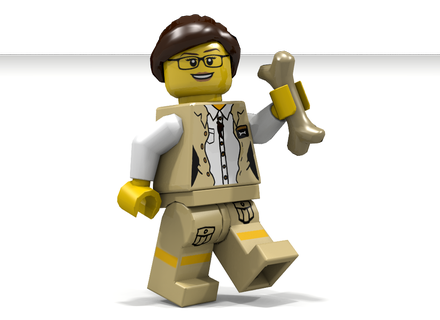 The paleontologist is now wearing khaki shorts, an open vest, and a white buttonup shirt. Additionally, she wears a museum namebadge and has a Velociraptor claw hung around her neck. If possible, I would love for her to have the short-sleeved arm pieces introduced in the Simpsons minifigures; it makes no sense for her to wear shorts with long sleeves.

Admittedly, this is based more on what I would personally wear if I were a museum's resident paleontologist than a representation of what paleontologists usually wear, but I wanted it to have personality to it. Also, keep in mind that I am hardly an artist, and this does not represent the quality the final printing would be at.

Thank you again for all of your support!