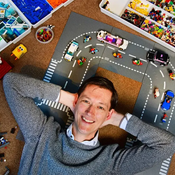 With some 600 supporters needed to get to the goal of 10.000 it goes without saying that I'm beyond excited. I'll post an update soon about the terrific journey this has been so far, but first a bit of a technical thing. Segregated bike lanes. Safe bike lanes are more than just paint on a road and I've got many comments asking for properly segregated bike lanes. With this Lego Idea anything is possible, so here are some examples, using this Bike Lane Idea and set 60304 (road plates) as a basis... 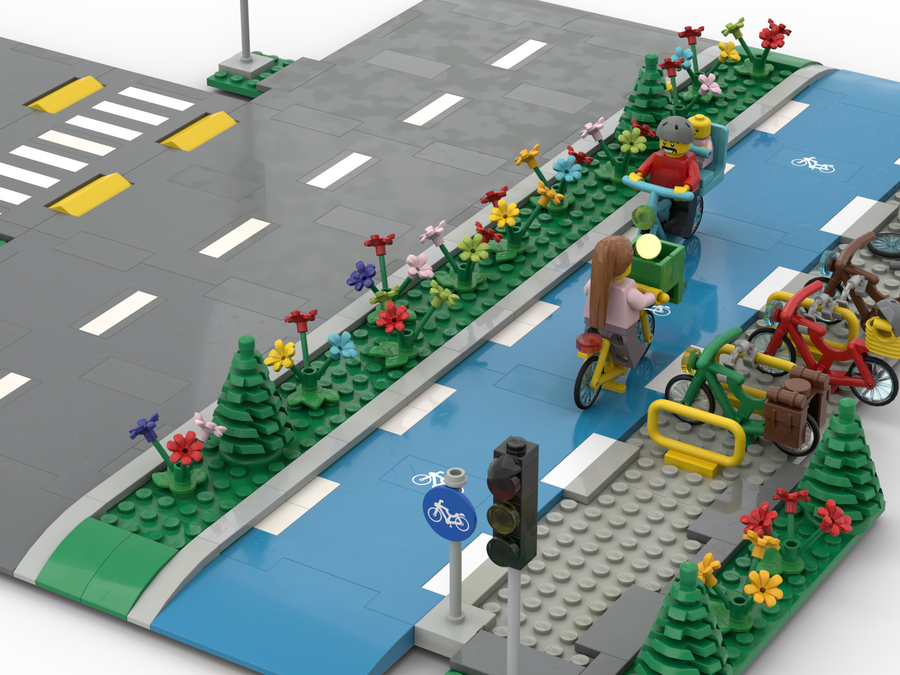 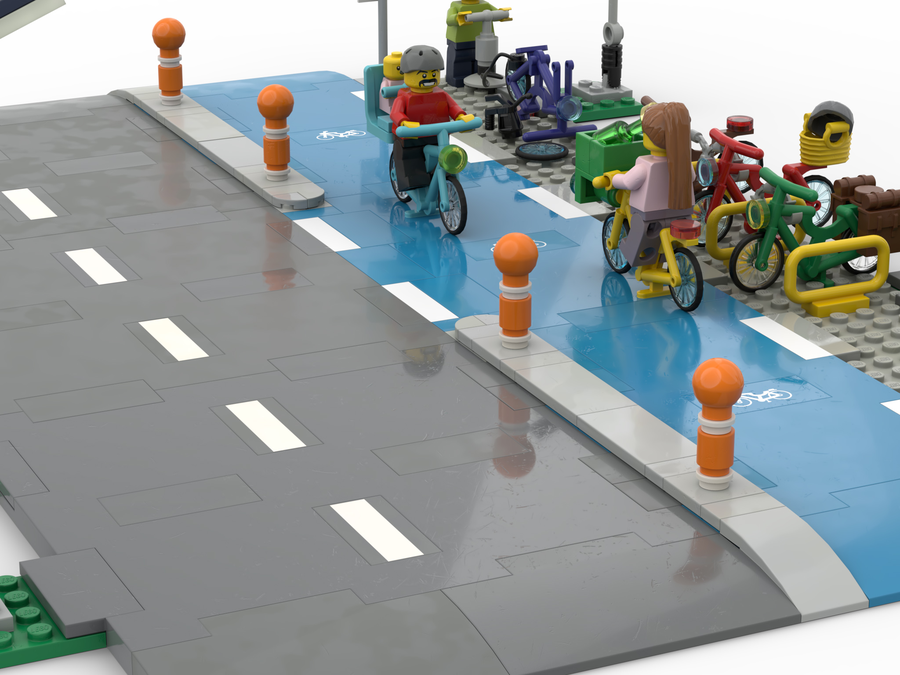 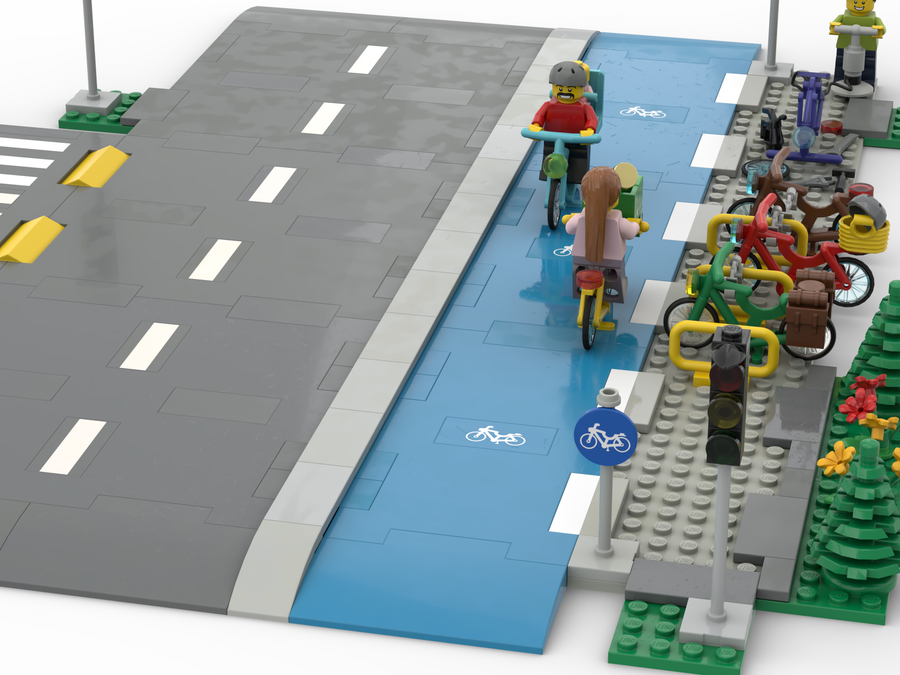 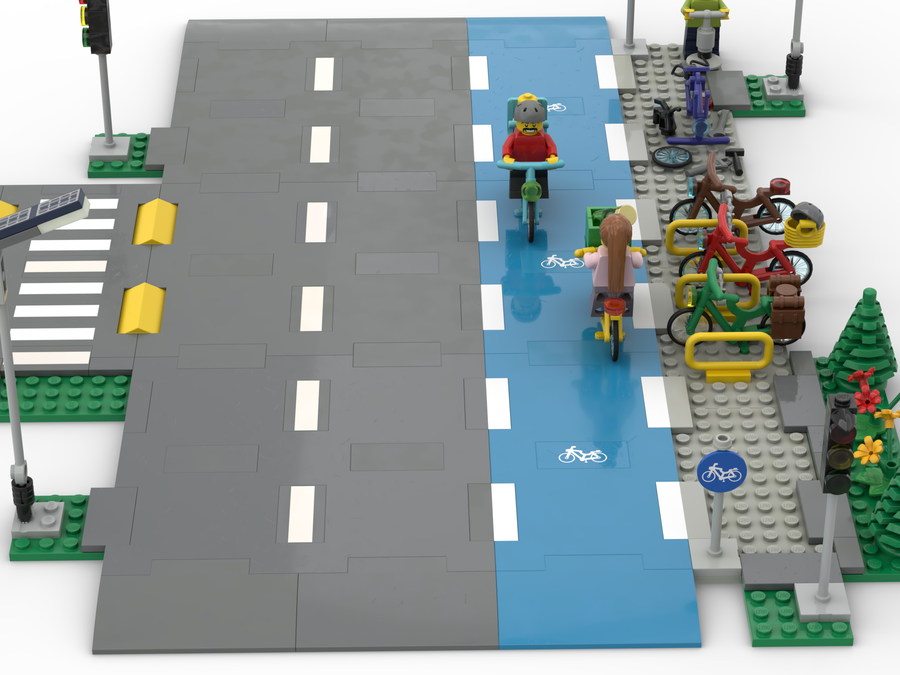 Season 2 of the Dutch LegoMasters has started in Holland and broadcaster RTL4 got news of my initiative, resulting in another very cool online article (dutch) and, to my surprise, a short shoutout on national news as the hot tip of the day. With result: Lego Bike Lanes is now over 8000 supporters (I am so very, very grateful for all of those!). In the article the Dutch Brick Master from LegoMaster commented on my idea (!!). Roughly translated: "I am a fan of all creative expressions, I support this wholeheartedly," the BrickMaster says. "A Lego Ideas set with a Dutch touch would of course be very cool, so onwards to 10,000!". 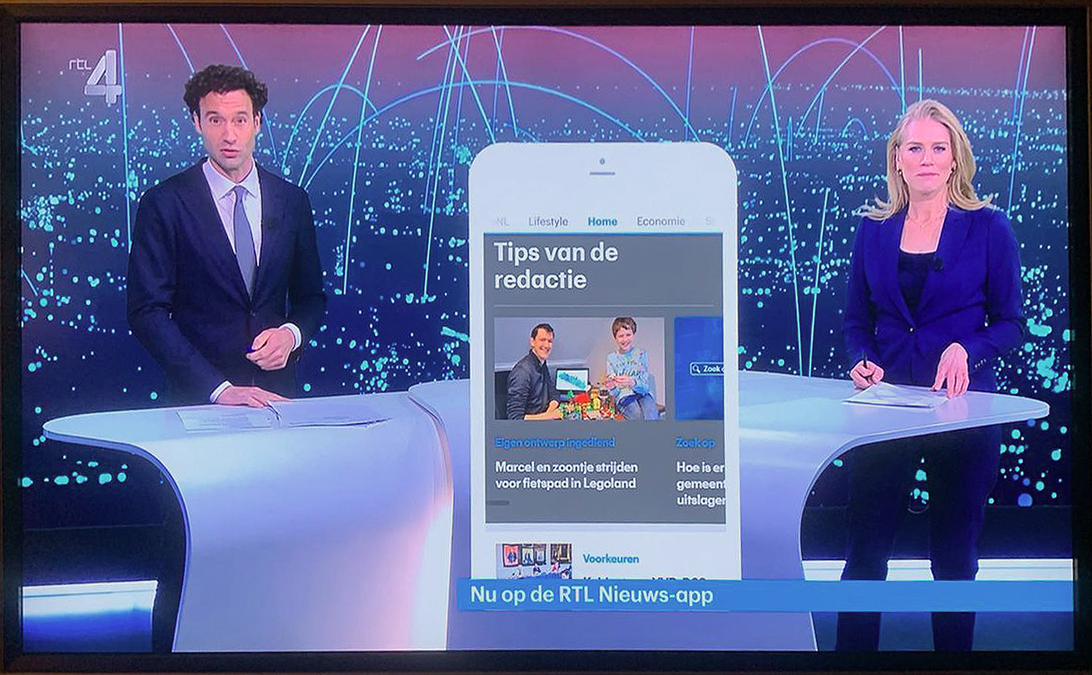 This saturday my son and I got the chance of talking about Lego and Lego Bike Lanes on Dutch national radio, Radio2 - Spijkers met Koppen. We had tons of fun (Dutch): Marcel Steeman, D66 Statenlid in Noord Holland wil zelfs in Legoland bredere fietspaden 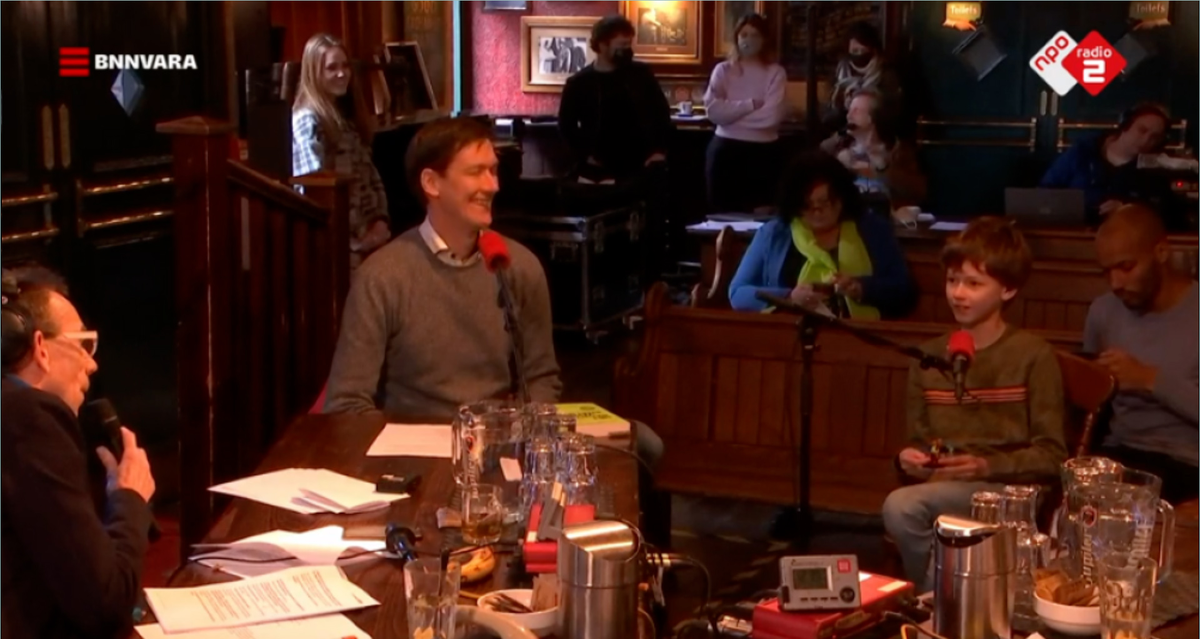 Belgian satirical news show De Ideale Wereld (Belgian national TV) did an entire bit about this Lego Idea, very much unannounced and very, very funny. Including this hilarious animation on what could go wrong when proper bike lanes are introduced to the Lego World. And to be fair: that must have been some work, the animation is just perfect. Warning: it contains a lot of Lego fire and some minifigures do get hurt along the way...
On Feb 15, 2021

Support and attention for this idea keeps coming in, steadily on the way to full support (but please keep sharing and supporting!) . On my son's 10th birthday the bike lanes got to the halfway-point of 5000 supporters, much to his delight (he is keeping track of supporters multiple times a day). The earlier article in the newspaper (as mentioned in an update below) was published in another newspaper in another region (Dagblad van het Noorden -- translated version) as well, to my surprise. I got the opportunity to briefly talk about my 'quest' to add bike lanes to Lego City on a national radio station BNR, including a kind of show-and-tell of some Lego bikes, really fun to do. Last week a regional TV crew came to film me, but in the end I was more or less pushed aside to give room to my son, who is a far better advocate for Lego bike lanes than I could ever be. The article on NHNieuws -- translated version and TV -item are just really fun and give a good view of my work-at-home-office between all the Lego and the way this has really become a father-and-son project. 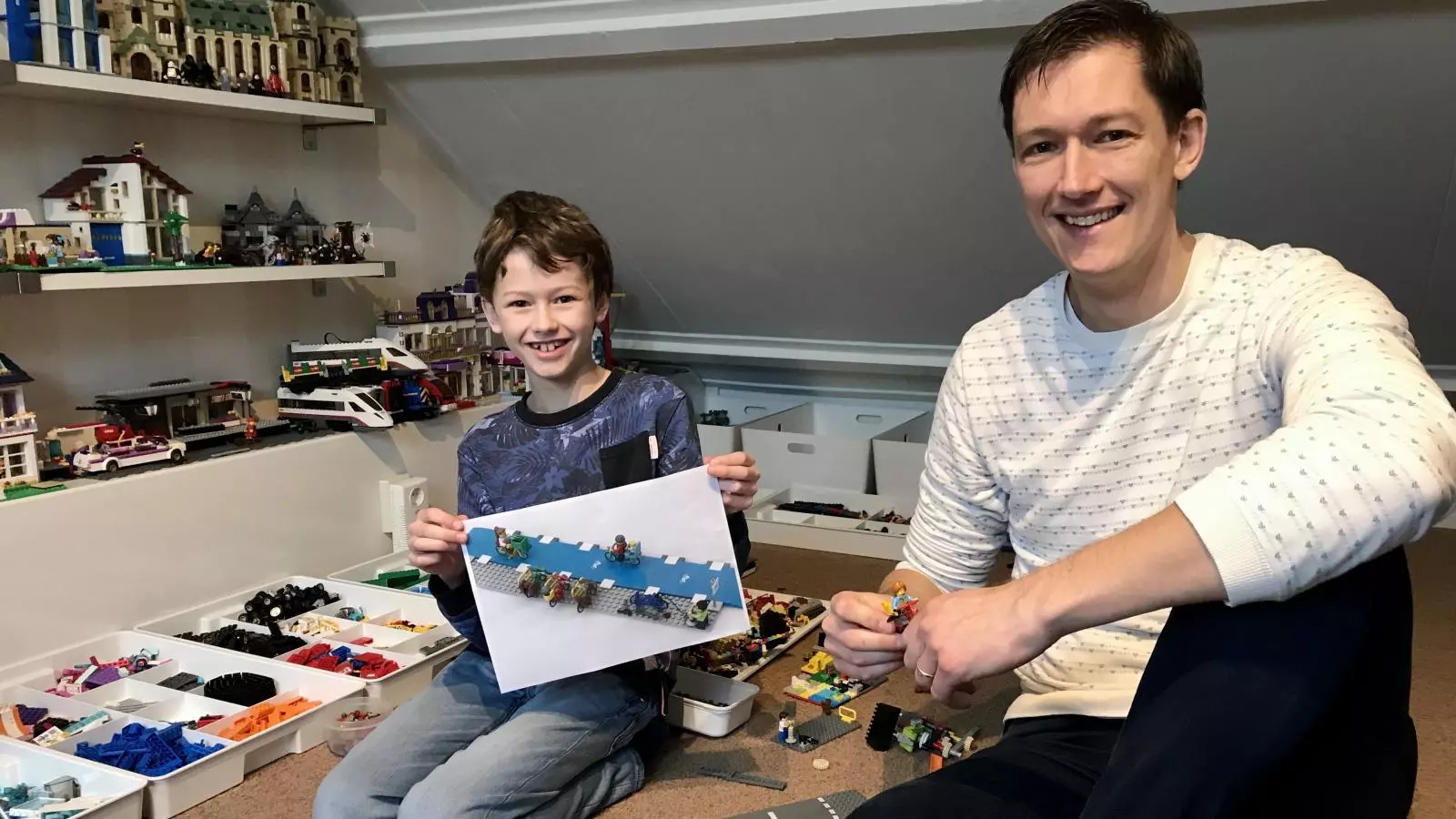 Lego Bike Lanes can be filed under the label "finally some fun and good news" that is being picked up by various sites and media around the world. A bit overwhelming, but really fun nonetheless. I've learned new words in Finnish, Turkish, Czech, French and German, most of them meaning "bicycle lanes". I've given interviews to websites, been on national radio in my home country of Holland and this saturday the regional news will film me between all the boxes of Lego around my home-office-desk. The effect is that this idea is creeping up to 4000 supporters in a very short time, but I keep repeating: please share, tag and keep supporting! And if you know a newspaper or TV show in search of some good news... give them a thumbs up (and link the article on The Verge, that still is such a nice read).
Lego-enthousiast and colleague Ezra took to his digital Lego renderer as well and created this awesome and inspiring street scene with the bike lanes added to them. Come on. This is something you want to see in real life, isn't it? 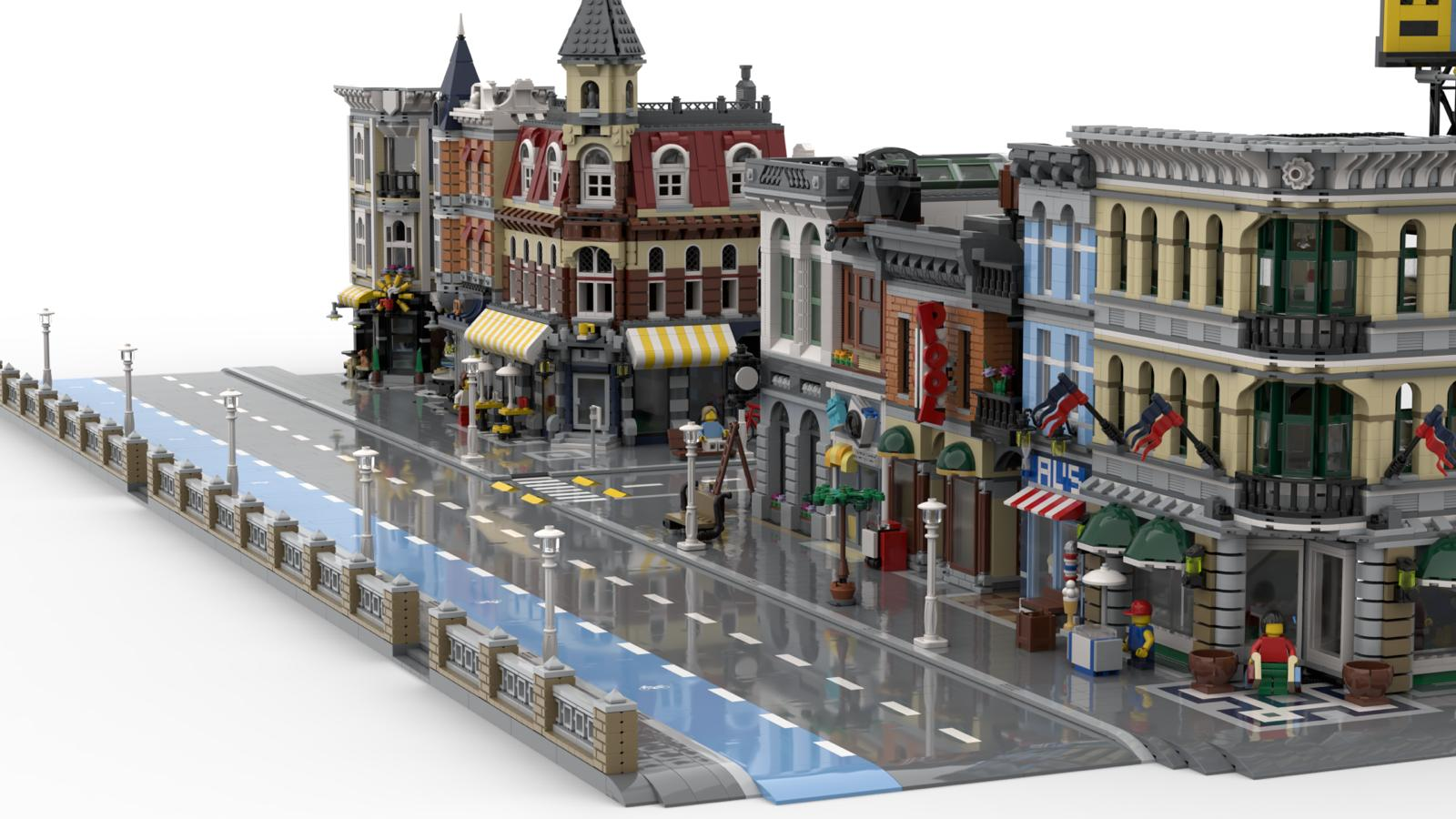 2000 and something about lines

That article on The Verge put the spotlight on this Idea, with a massive amount of supporters as well. And when that many people look at your design, it really is scrutinised. So let me explain a few choices. Yes, the Dutch bicycle lanes are red and red looks very good as a Lego bike lane... *but* the blue color is what Lego itself has chosen in their set 60306. So blue makes use of as many existing parts as possible. And for set 60306 (the shopping street); it has got a nice cargo bike that I couldn't recreate digitally (it has a special frame that I didn't have a 3D model for), so I left that one out of this Idea. In that set there is a small bike lane, not even wide enough for that cargo bike. I took that bike lane as a start (better than nothing) but it is nowhere near wide and good enough. And on the box art there is even a little fence and a truck on the bike lane... You should look at my Idea as a new standard: actual playable and modular safe and wide Bike Lanes.

The hardest part was to make a set that can be combined with the new road plates. In my Idea I've chosen some 2x2 and 1x1 tiles in already existing colors, so the plates can be easily combined. Newly custom printed 2x4 (with a white line) tiles look way better and are a more solid link (see below), but the question there is: what color do you make the tiles that click on to the sidewalk. Or park. Or front yard. Or canal. Or... well... that can be anything. That will be something to think about with the actual Lego designers when this Idea reaches 10.000. So keep on supporting, sharing and tagging this idea as far and wide as possible. 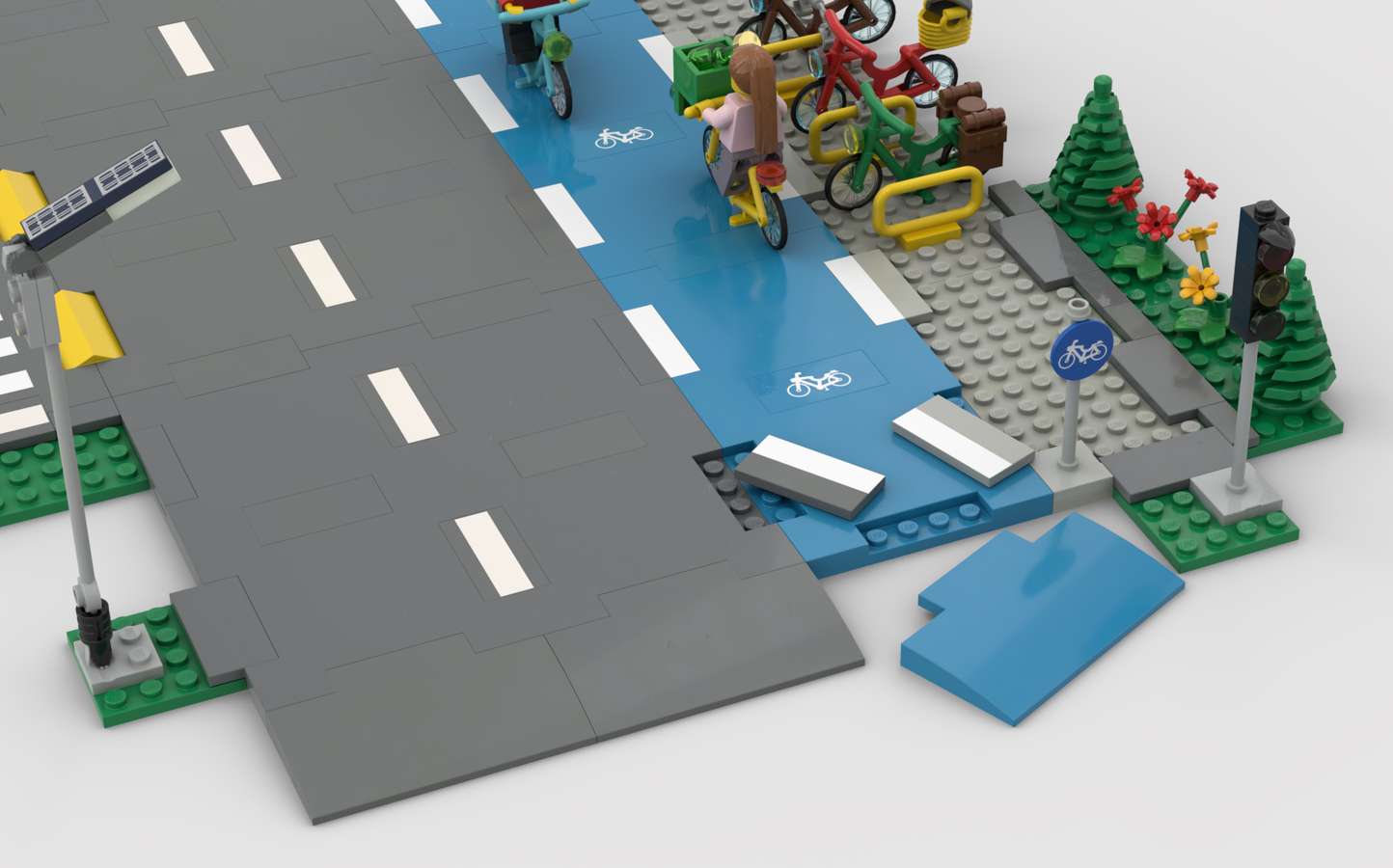 What was supposed to be a lazy sunday ended up a bit hectic. A post on reddit gave this idea a boost above 1000 supporters today, and I am forever grateful for that. The automated reply from Lego congratulated me on gaining 1000 supporters "within the first year", but this was only the first *week*. Crazy, humbling and so, so much fun to follow all comments. But then, this afternoon (where I live) The Verge did an article on my "quest" to get decent bicycle lanes in Lego City. An extraordinarily flattering honor to have someone write an article about all this, and it's a very, very nice read as well. Support is through the roof right now, I can only hope to keep this ball rolling to 2000, 5000, 10000...

I'ts so much fun reading all the replies and comments and seeing this idea really taking off. It seems the time is actually right to make this idea reality. In the meanwhile Dutch newspaper NoordHollands Dagblad wrote an article about my initiative, featuring my biggest inspiration: my son. If you look closely you can see the real-life-test-versions of some of the bikes that made the final set in the picture. And a rocket-powered astronaut-version as well.. So... these Bike Lanes took off to a flying start. After only a day and a half and an exploding timeline the first hurdles were taken at breakneck speed. During my work-at-home-day I saw supporter 200, 300, 400... exciting stuff. It's really helpful to see all the supporting messages and feedback and this all gives me hope this five year old idea can finally become reality. So keep supporting, keep sharing and keep tagging everyone that is enthousiastic about Lego or bikes or both. Thank you all, this means a lot. The sooner we'll get this idea to 10.000 the better!