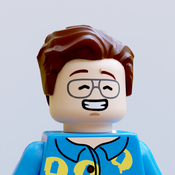 By Piece of Mind
37 comments

𝓛𝓸𝓷𝓰 𝓪𝓰𝓸 𝓲𝓷 𝓪 𝓭𝓲𝓼𝓽𝓪𝓷𝓽 𝓵𝓪𝓷𝓭...
I, Aku, the shapeshifting master of darkness, unleashed an unspeakable evil!
But a foolish samurai warrior wielding a magic sword stepped forth to oppose me.
Before the final blow was struck, I tore open a portal in time and flung him into the future, where my evil is law!
Now the fool seeks to return to the past and undo the future that is Aku!
This LEGO model shows the basic ideas in the Cartoon Network show Samurai Jack!
On the left is the past, Jack's home, and where he seeks to return. On the right is the future which he is trying to escape.
In the middle is the dark lord Aku, and Samurai Jack himself.
Any fan of Samurai Jack would love to add this to their LEGO collection!
The model includes:

By Piece of Mind
37 comments