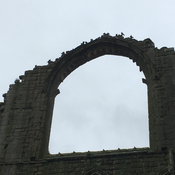 By E.A.Faux
127 comments
Inspired by Leeds General Infirmary, Yorkshire, England, UK.
This building displays the contrast in architectural style between Gothic and modern. Just like the real building in Leeds, this captures the juxtaposition of new build next to old.
I chose to represent the X-Ray department, mostly because this department has more exciting equipment!
(And doing the whole hospital would have been more pieces than the Colosseum set!).
I wanted to make something that held true to Creator Expert traditions but also was more playable via the gatefold opening style, rather than lifting off layers.
I also like this way off opening because you get to enjoy the look of the build in parallel and in series.
This connects easily to the left-hand side of any 32x32 official Creator Expert set, however, if opened out fully, can also connect to the right-hand side of a set too.
Unlike my real bricks Art Deco Cinema submission which you can see at LEGO IDEAS - Art Deco Cinema, this was created virtually in Stud.io, which, if you haven't tried yet, I would definitely recommend. There are exactly 2999 pcs in play here (including minifigures). 53 pieces out of 2999 would need making "official", the reason for using these in this LDD was to keep the overall piece count to 3000. e.g. using 1 piece at 1x2x5 instead of 5 pieces at 1x1x2. The "glowing" pcs are just for visual interest and have corresponding translucent bricks in official colours.
Some key features include:
CT scanner with sliding gurney.
Y-Ray machine which slides both vertically and horizontally.
Working lift and sliding lift doors (string/lift cable not shown in photos, sorry).
Florist concession.
Italian coffee stall.
Gothic style flooring.
Gothic columns/pillars.
Gothic windows.
Gothic roofing.
Curved and slatted entrance hall on a non-standard angle.
Statue and plaque.
Vending machine.
Reception desk.
UK pillar box (post box).
Bicycle railings.
11 minifigures.
I made this for fellow fans of buildings and architecture, but also for my little one who loves to play.
I'm here for the ride, I would be honoured by your support and comments.
With thanks for inspiration, comments, upvotes and a lot of support:
@EvLeFri﻿ @Brickester﻿﻿ @Sir Brickatroyd﻿﻿ @Samurai Daisho﻿﻿@thelegobear﻿﻿
With love and best wishes to all the amazing people who are part of the LEGO Ideas community.
Px