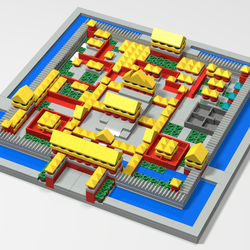 The Forbidden City (紫禁城), also known as the Palace Museum, and Gu Gong (故宫) in Chinese, lies at the centre of China’s Capital City, Beijing. It once served as the Imperial Palace for 24 emperors during the Ming and Qing Dynasties (1368 - 1911). Now known as the Palace Museum, it is the world's largest palace complex and covers 74 hectares. Surrounded by a 52-meter-wide moat and a 10-meter-high wall are more than 980 buildings containing some 8,700 rooms. The Forbidden City was declared a World Heritage Site in 1987, and is listed by UNESCO as the largest collection of preserved ancient wooden structures in the world.