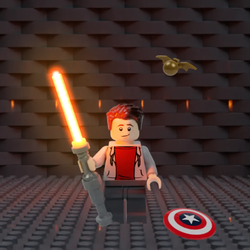 I chose to design the Cape Cod Canal Railroad Bridge as a Lego set because it is a fun and exciting landmark in Massachusetts.  I built this Lego set because I often vacation on Cape Cod with my family, and I have seen the bridge in action.  Adults and children enjoy watching the bridge lower to allow a train to pass over the canal, and then raise up again to let ships to pass, and they will often try to get to the bridge to see it in action.

On this Lego model, when you turn the dials at the top of the bridge, it raises and/or lowers the bridge.  I believe this is going to be a great Lego set because people already love the excitement of the bridge, and to make one that really works and that you can control by yourself will provide entertainment and engage their imagination as the Lego boats and trains go through the Cape Cod Canal Railroad Bridge.

This model includes 806 pieces that make up:

To see a 3D model of my build, click here.