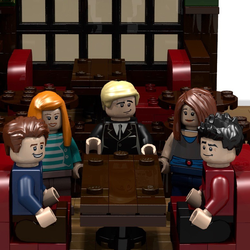 It´s the year 1979. The earth was destroyed by an asteroid. Tom is the only astronaut with his spaceship and 3 survivors. In the flight through space the discover together a new, orange planet.

Help him create an inhabitable earth from the orange planet.

Goal of the Game:

Build a new earth. Put Tom in on of the 13 possible positions and then build a new earth with all the building blocks around Tom. A challenging game with many variations that will give you many hours of enjoyment.

You have fun twice with this Lego set. Once in building and then in solving the many possibilities of creating a new earth.

The complete game consists of 172 parts.