Hyrule Castle (The Legend of Zelda) 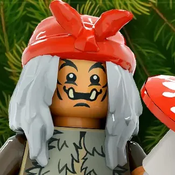 Hi Lego fans!
Here is my Hyrule Castle from the Legend of Zelda series built and decorated with great love!
Since the days when I was a kid, The Legend of Zelda is my favorite series of games.
This game has a huge fanbase, and it is not surprising that there are so many Zelda projects. And they are all great, but which one you want the most?
That`s why I decided to look at the idea not as author, but as a buyer.
What can the buyers expect from a glorious Lego set?
- Childrens want to play. That's why I've added various secrets and quests to the model. There are hidden places with unexpected enemies and pleasant surprises and treasures.
The insidious villain Ganondorf may take over Hyrule Castle! It is enough to turn one of the towers, and now it is crimson Ganon's  castle!
- Collectors want the good looking model on the shelf, that be intereting to examine. That's why I parted the model into semantic zones. There is a market square, a temple, a garden, and a cemetery  on the сastle`s territory. There is something to explore! I tried to build the castle in such a way as to create an expressive silhouette and make the composition of buildings attractive.
- Fans want recognizable elements from the game. Remember how happy you were when you playing the game found hidden by the rocky wall the entrance to the Fairy Fountain! Why not replicate this in Lego? And what about finding Pieces of Hearts, collecting chickens, breaking pots, and cutting road signs? These are must! It is impossible to imagine tLoZ without chests with a map and compass - I included them in the set. I've create 4 different Link`s shields, so fans can pick their favorite  game from the series.
And the cherry on this cake is the kingdom's coat of arms from the cover of the very first game - it`s built from Lego parts.
- Ask for me: what would I like to see on the shelf in the store?
I dream to buy a castle`s set, with walls and towers. And I would really like it to be based on the baseplate because it's an incredibly cool piece.
By putting these components together, I wanted to create enjoyable set for everyone. I hope it is!
Thanks for your attention! I hope you liked my idea,
Artem